Well, I said that I would try it and report back. I shared a blog post on Facebook way back at some point of spaghetti stuffed hot dogs. Of course I searched all over my facebook page and couldn't find the original share but I found another example of it here.  To me, bland boring hot dogs being boiled in water, makes them blander...if there could be such a thing. :-D  So I decided to rework it my way. :-D

First getting rid of the bland dogs.  I saw this at my grocery store and figured that it should be pretty good with a tomato sauce.  You can use any sausage you want...well almost any.  You want sausages that have been precooked, like your favorite smoked sausage, something like the kind in the picture below, one of those summer sausages, or even andoue. I imagine you can use something like a bratwurst too, just not RAW. It must be pre cooked, then at least partially cooled so that you can handle it. You will need about a pound for 4 people.  this was 12 oz...but I was serving 3 so it was perfect.  The amount of cooking time will not be long enough to fully cook the raw sausage...bad mojo there. :-D 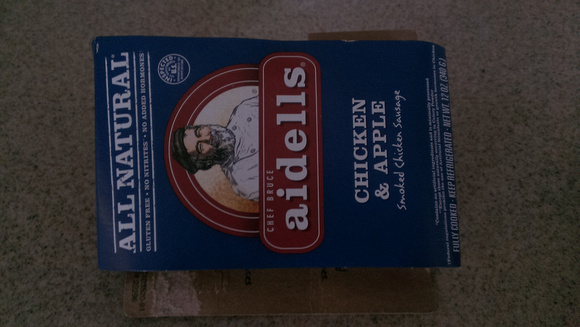 Use your favorite "cooked" smoked sausage.

Next you eat with your eyes, and nothing to me is worse than that boiled hotdog look, so after slicing the sausages in 1" pieces, I browned them in a little bit of oil.  Then let them cool to touch.  This part is optional, I just like the color of it when it is fried. 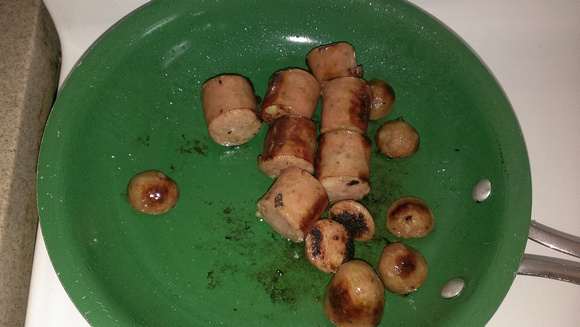 I got in a hurry and forgot to take pictures of me stuffing regular sized spaghetti noodles into the sausages...but the regular size spaghetti will go through the sausages without any issue.  I don't know about things like angel hair, but I  imagine that if you are really gentle, it should go through without any issues.  I have also seen them stuffed with different macaroni style noodles, so I would think that the sky is the limit with your noodle selection...except maybe shells...yeah that won't work too well. :-D

Another problem I had was that my sauce pot was too small to fit the spaghetti in so I preboiled them a little so that they would be limber enough to go into my sauce pan...about 1-2 minutes should do...you want them to be just limber enough to go into your pot without breaking...I had a few casualties there...2 minutes is probably the best...either that or a bigger sauce pan. :-D 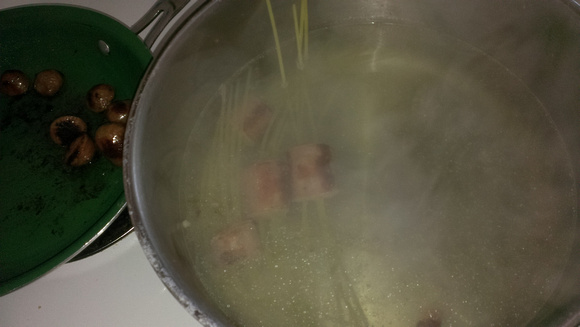 Boil till limber enough to go into your sauce pan.

This is them in my 2 quart sauce pot...yeah too small...but it worked. They just fit in there.  Once they started cooking, they settled in quite nicely.  I imagine if I do this again, I would do it in a large skillet or maybe as a crockpot dinner.   Now the other important thing here is that you MUST keep your heat low to keep your sauce from sticking to the bottom of your pan.  Also you must resist the urge to stir the spaghetti...I got a few more casualties  from that as well. :-D  That is why I think this will go better in a crockpot. ;-)

The sauce is a mixture of freezer sauces that I had left over.  A homemade meat sauce and a homemade marinara sauce, plus a bout a cup of tomato sauce for the liquid. 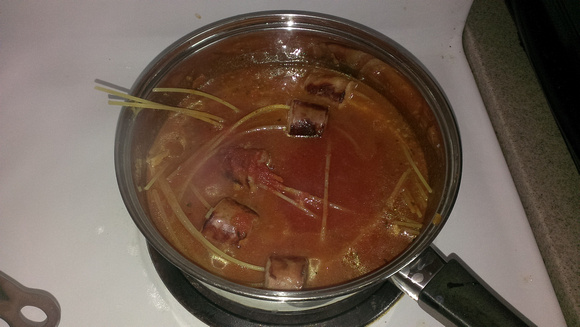 Below is the finished work of "art". :-)  Sorry for the messy plate.

A little crusty bread, some Parmesan Cheese, and some fresh herbs will elevate this...but I didn't have any of that so I just dug in. 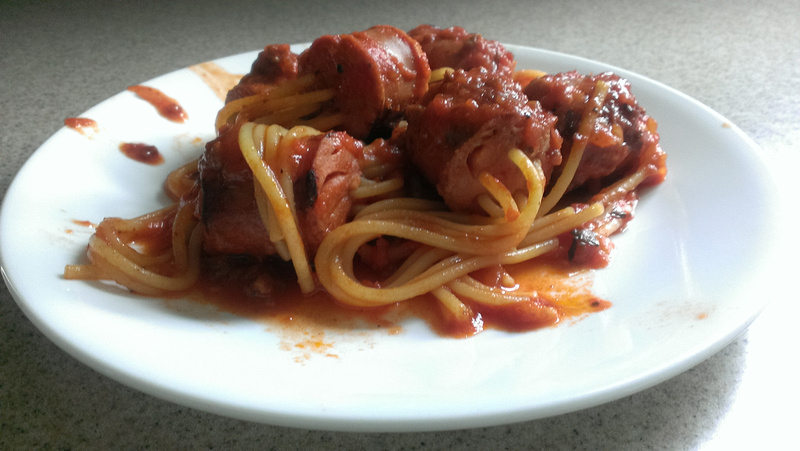 This serves three, but there were only two eating lunch today, so more for me. :-D It was delicious!

I would cook more spaghetti to go with the dish because I thought it needed more noodles. that also spreads the meat out so you could serve more with it if you wanted to.