Bands On The Run

Bands On The Run

When I go birding, I always look for birds with bands on them. This was one of the first things I was interested in when I seriously started bird photography. A Hudsonian Godwit was at Big Island Wildlife Area in Marion Ohio, with a white flag that turned out to be a tracking device. Through reporting that band, I learned about efforts to discover the migration patterns of Godwits.

Most banded birds just have a silver government bands that you have to recapture the bird to read them. 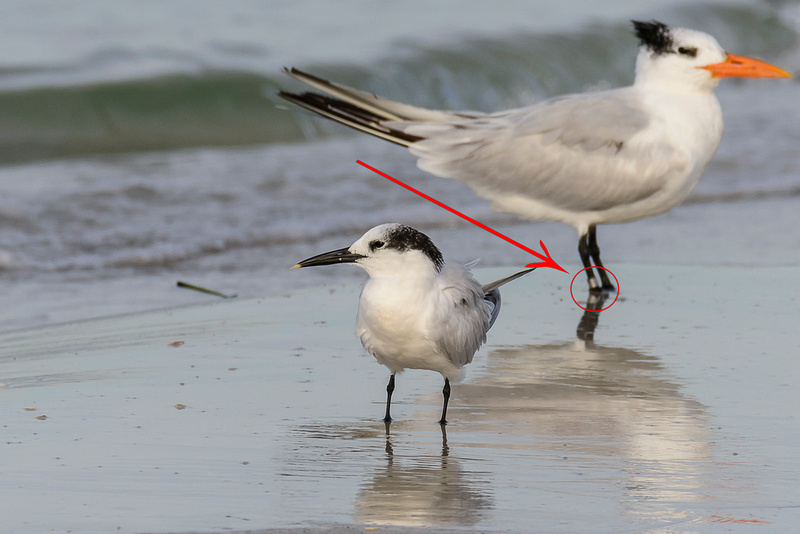 (I didn't see this band till I got home, or I would have tried to take some sharper pictures of it to try and pull the numbers off of it.)

Other birds have bands that are more colorful, and can be identified from a distance...or from photographs later. Piping Plovers for instance have a series of colored bands that identify them as to where and when they were born, and even to which set of plovers were their parents...all from a series of bands.  Here is a picture of a piping plover that I saw here In Ohio.  From the band information given to me by the Great Lakes Piping Plover Project, it hatched in the summer of 2016 at Whitefish Point, MI. It was banded by the University of Minnesota crew, stationed for the summer at the University of Michigan Biological Station. 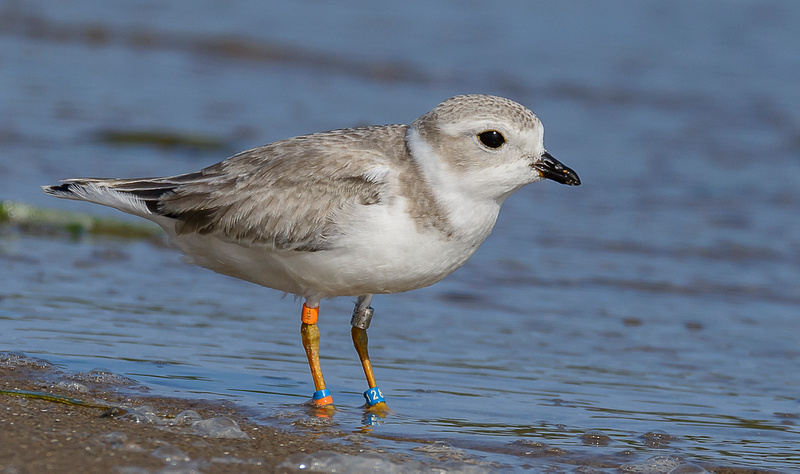 I usually only see one bird with a band...if I even see them at all. So when I was at Bunge Beach Florida, I was enjoying the spectacle of shorebirds feeding on the beach, I saw a familiar plover with the familiar leg bands. Click on any of the pictures below to be taken to the individual species gallery. :

Then a few yards away I spotted another with different band colors: 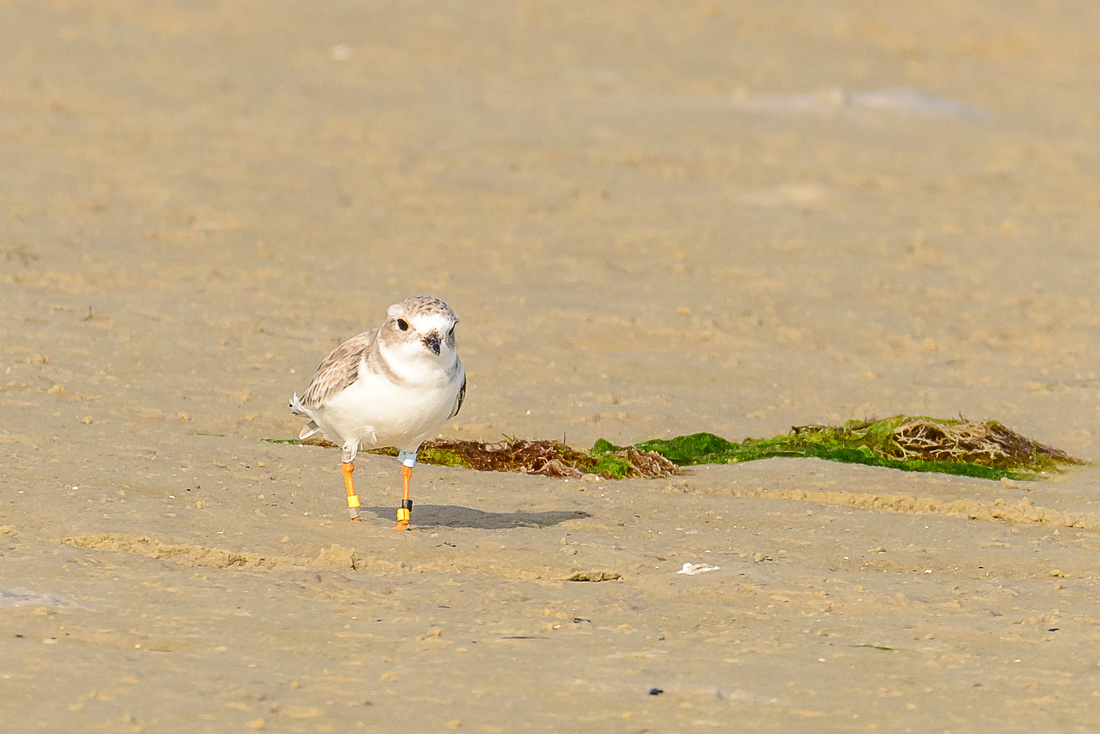 Being a banded Piping Plover, I happened to already know the probable bander was the Great Lakes Piping Plover Recovery Effort so I emailed them directly instead of using the traditional USGS bird band reporting site.

They fed back to me that the Orange flagged bird was one that they had banded :

“The plover with an orange flag has an interesting story. He's one of the chicks that was captive-reared in 2014 after one of the parents disappeared (probably caught by a Merlin) and the nest at Point aux Chene, MI was abandoned. When that happens the eggs are collected and given a second chance in our captive rearing facility at the University of Michigan Biological Station near Pellston, MI. After the eggs hatch, avian-specialist zoo-keepers raise the resulting chicks in captivity until they are flying well. They are then released near wild-reared chicks of similar age. He was released at Sleeping Bear Dunes National Lakeshore on North Manitou Island. I'll attach a photo I took of him shortly after he was released. He returned to breed at Port Inland, MI. Good to see that he's still doing well.”

So this bird, if it were not for people concerned about the recovery of the species...would have never lived.  Its nice when you can get in touch with the banding, sometimes the bird has a story all its own.

The second plover I received a report on a little later.  It's blue flag marked it as a bird that was from another banding project in Nebraska.

Here is the write up from Mary Brown of the School of Natural Resources at the University of Nebraska:

“Hi Steve, thanks for passing along the information and photos. This is one of our birds from the lower Platte River in eastern, Nebraska. The bird was originally banded as a 2-day old chick on 16 June 2011 at a lakeshore housing development in Dodge County, Nebraska. If you see any other plovers wearing light blue flags, please let us know,..”

That is definitely my most western shorebird bird that I have photographed on the Eastern half of the US.

But my list of banded birds do not end there.

While photographing the plovers, a group of Red Knots in winter plumage flew in almost right beside me. Within that flock were two that had leg bands. 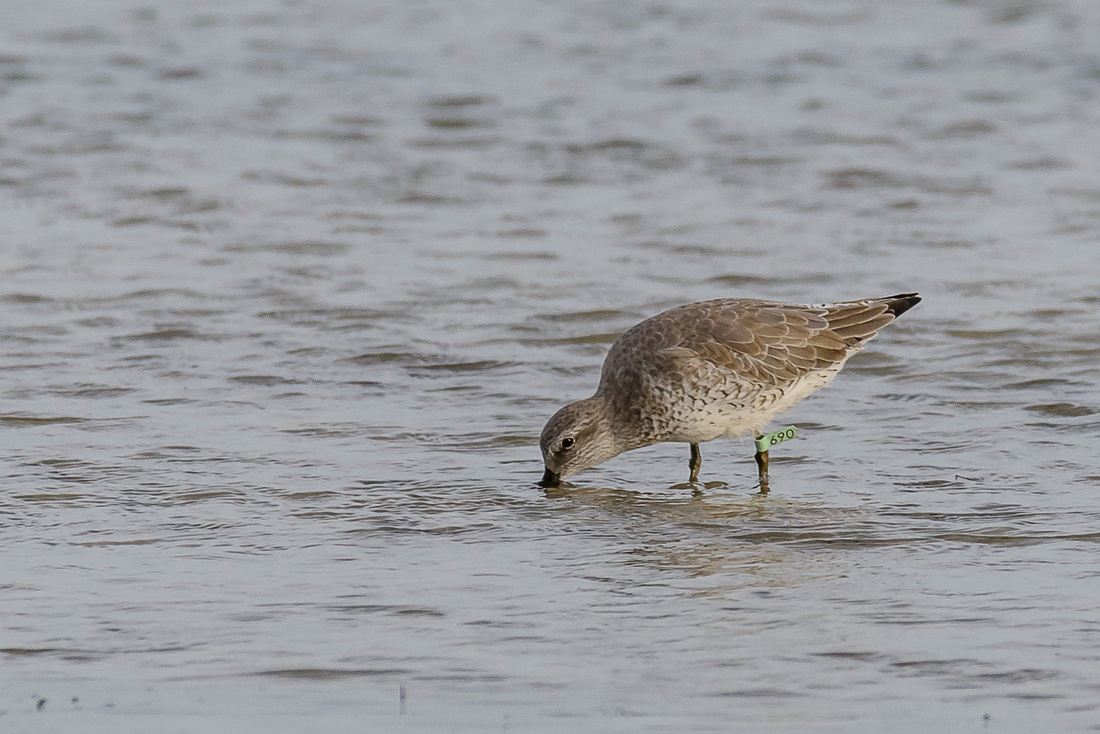 There are lots of websites discussing the banding of shorebirds, here are the ones that were involved with the birds I spotted on this trip:

The Great Lakes Piping Plover Project has a blog:

Along with the University of Nebraska-Lincoln. The pictures at the bottom look like the same plover I found again this year...probably on the same beach. :-D :
http://ternandplover.unl.edu/plover/winter-plover.asp

Next week I finish the West coast and head East.