I feel sort of guilty spending more blog time on West Cost birding. I spent the same amount of time on both coasts, and I saw a lot of birds on both coasts...but something was different between the two. It is clear to see which coast is visited more by tourists. Except for a few pockets of public beaches and national parks, the whole east coast is either developed beyond belief, or beach access is fee based, with very little public parking. Its so bad that if the first 100 yards of shore falls into the ocean, Florida would be plunged into a depression that would take years to recover from.

I purposely try to find places that are great birding spots, and free...or near free. West coast, except for the $6 toll to get on Sanibel Island, and another fee for the driving tour on that Island (full disclosure Vincent's Senior status paid for the tour...) I think I paid $2 for parking at Bunche Beach. East Cost birding around Merritt Island and Cocoa Beach was costly, or would have been if I had paid all the fees.

On my first east coast day, with very little public beach access, the areas where there are shorebirds to be seen are few and far between. The best location I went to was Merritt Island National Wildlife Reserve and the Canaveral National Seashore. It reaches north to Apollo Beach which is near Smyrna Beach and goes all the way down to Port Canaveral. I did not go to NASA while I was there...been there, done that. However, NASA does rule the roost, so if there is a launch pending, part if not all of the reserve is shut down. When I went the cost was $6 for entry. That included both beaches and the wildlife drive. Though if you have the America the Beautiful Pass, you get in free. Seniors pay $10 (Plus $10 for documentation fees) and they get the pass for life...us mere youngsters have to pay $80 a year...but it is still cheaper if you go to a lot of US pay parks or if you take a car load of kids...wish I would have known this LAST year. :-D...Anyhew, more info on the passes here:

I had very few shorebirds while I was there, but the east coast was also in the midst of cleanup from Hurricane Mathew, and the National Seashore still needed a lot of cleanup when I went, so they may have been pushed somewhere else while I was there. I had a lot of Brown Pelicans, Terns, Gulls, Sanderlings, and Red Knots, and that's about it. I had better birding opportunities at the wildlife drive. Nothing new, but still a bunch of good birds: 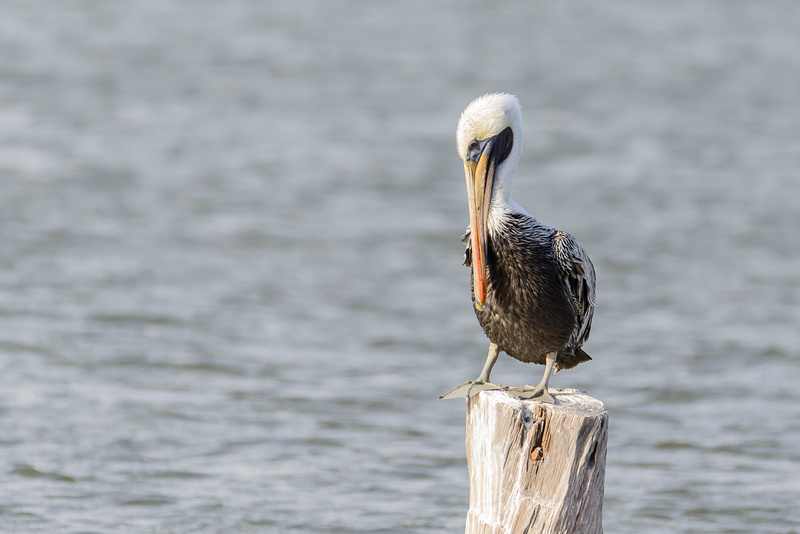 Before I continue, I have to ask...How far would you hike in +80 degree heat to see one bird? If it is an everyday/everywhere bird, I wouldn't go out of my way, however if it were a hard to find life bird...I'd hike a few miles. Red-cockaded Woodpeckers are listed as endangered and pretty much every nest is protected in one way or another. It is a bird that used to be common, but became endangered due to habitat loss.

From The US Fish and Wildlife Service:

“RCWs were once considered common throughout the longleaf pine ecosystem, which covered approximately 90 million acres before European settlement. Historical population estimates are 1-1.6 million "groups", the family unit of RCWs. The birds inhabited the open pine forests of the southeast from New Jersey, Maryland and Virginia to Florida, west to Texas and north to portions of Oklahoma, Missouri, Tennessee and Kentucky.

The longleaf pine ecosystem initially disappeared from much of its original range because of early (1700’s) European settlement, widespread commercial timber harvesting and the naval stores/turpentine industry (1800’s). Early to mid-1900 commercial tree farming, urbanization and agriculture contributed to further declines. Much of the current habitat is also very different in quality from historical pine forests in which RCWs evolved. Today, many southern pine forests are young and an absence of fire has created a dense pine/hardwood forest.”

There is a wealth of info on the Red-cockaded Woodpecker on the USFWS website:

I was given a contact of someone involved in the program who was able to give me a lead to a park that has nesting woodpeckers...the only caveat...a six mile hike, possible knee deep water, and 90 degree highs. So off I go to Hal Scott Regional Preserve and Park in Orange County. Basically its a big park with unimproved trails. The preserve is managed by The Saint Johns River Wildlife Management District. Their description of the park is here:

The nesting sites are well marked, and there are active sites near the back of the park. Bur they have been seen all around the park. You just have to keep your eyes open. Click on any of the pictures below to be taken to the gallery. 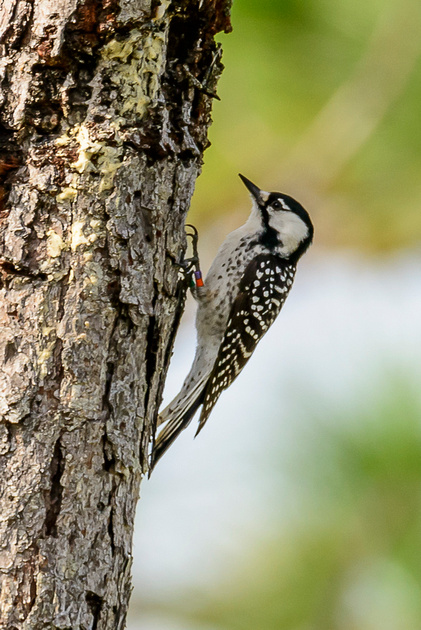 After I got back from that, I met up with my dad and we went to the city/town of Viera and went through their drive park. There were a few normal birds there, and was a good drive. It is similar to Merritt Island Refuge, but it was one of those places that can be hot or cold....mostly what we saw close up were Alligators and a Loggerhead Shrike.

Final day birding was a little park that I saw on the way home from the funeral that I went to. I remember in the back of my mind that someone suggested that I visit this place...and that I needed to wear a hat...I couldn't remember why though. Having only a few more hours before time to pack up and get ready to leave, a visit to Helen & Allan Cruickshank Sanctuary in Rockledge was my last birding stop. The Sanctuary is managed by the Environmentally Endangered Lands Program of Brevard County. The website for the park is here:

When I got there, and saw the signs...I knew what it was I was supposed to see...and why I needed the hat. :-D the Florida Scrub Jay is a endemic species, meaning it lives in Florida only...and it is very...very sociable. 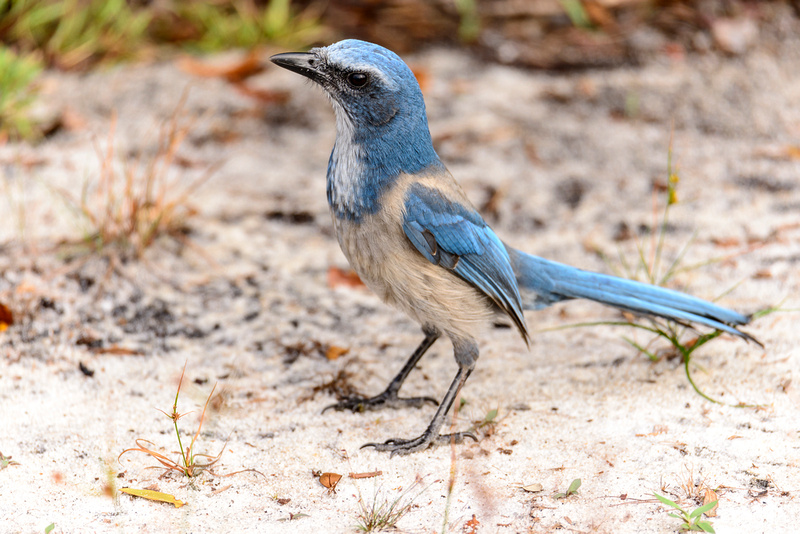 A short video on why you have to wear a hat...maybe I can get a product placement check from Waffle House. :-D

The last bird in Florida,  was a bird that I got in Arizona, way of in a field. Loggerhead Shrikes are all over Florida. Usually you can see one on a telephone wire every mile or so. My problem all week had been getting one close on some sort of tree or snag. Finally one landed on a snag and posed for me as I was heading out of the sanctuary.: 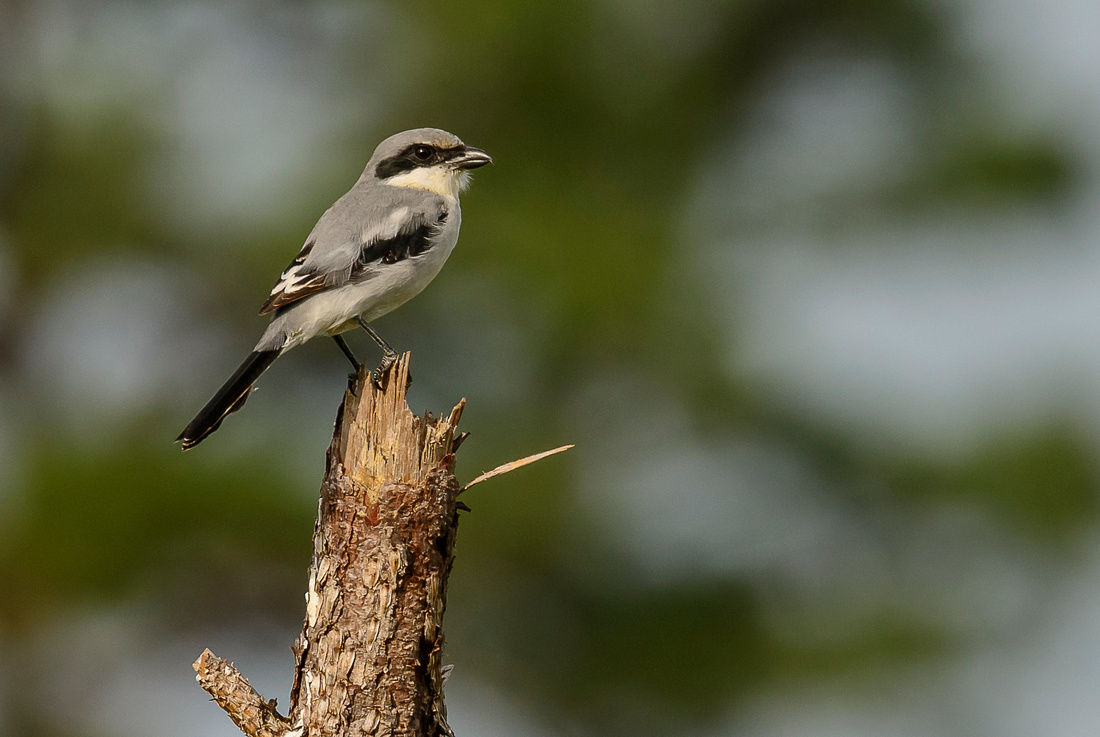 Well, that's about it. For the week I had 110 species and 18 life birds. Two or three life birds I only had views of, so I will have to try again for pictures. If I were to go again JUST to go birding...I would take a month, and travel all along the west coast...and down to the Keys...but that is for when I am retired. :-D.