That is exactly what two words started almost the entire Biggest Week In American Birding to be moved to a little small flooded field southwest of Toledo in Springfield Township. 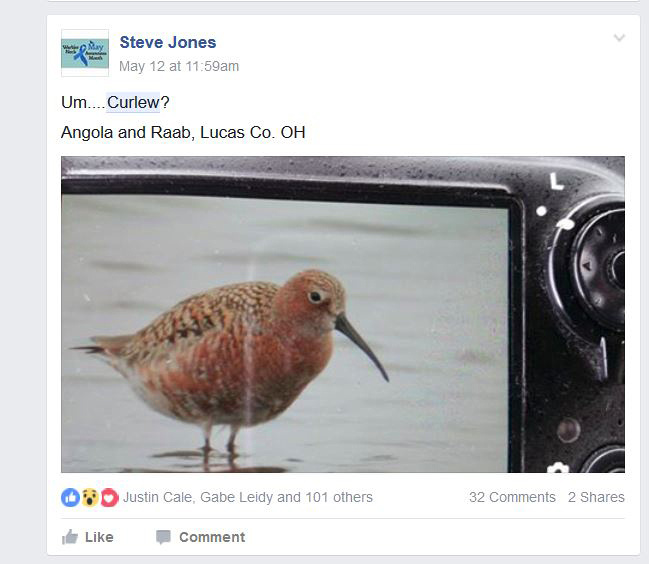 Um...Curlew?The Picture that started it all.

Let me back up about two hours.  As I was leaving my little town of La Rue Ohio for some bird watching up at Magee Marsh on the East side of Toledo, I got notification that one of my Facebook friends liked a picture of a Red-necked Phalarope on the South East side.  I had seen one before, but my pictures were terrible, so I decided to see if I could get a good picture of it.  A quick search and find of the address, and I was on my way.

As I arrived local birder Matt Anderson had just left. (Although at the time, I didn't know who he was.)  I parked where he was and scanned the pond.  I thought I saw the Phalarope, but I couldn't be sure due to the lighting, so I moved so that the sun was to my back. Turns out it wasn't.  but I went ahead and took pictures of everything so that I could scan later for things I missed.  I returned to my truck and gave a quick scan through the pictures.  A couple of Short-billed Dowitchers, Greater and Lesser Yellowlegs, Dunlin, weird looking Dunlin...wait...what?  the picture is blurry, so I get back out of the truck and refind the weird looking Dunlin...definitely not any sort of color morph of Dunlin that I know of,  but I am still just a part time birder with only 336 life birds, and 312 Ohio birds...However, that 312 Ohio birds means that I have seen about every "normal" Ohio bird.  The only birds I haven't seen are single birds that are only here for one or two days every five to ten years or so...and this was like nothing I had ever seen before, so I knew it was not a normal Ohio bird.

So now it's time for documentation shots:

Picture of mystery bird showing bill, chest, back, and butt. 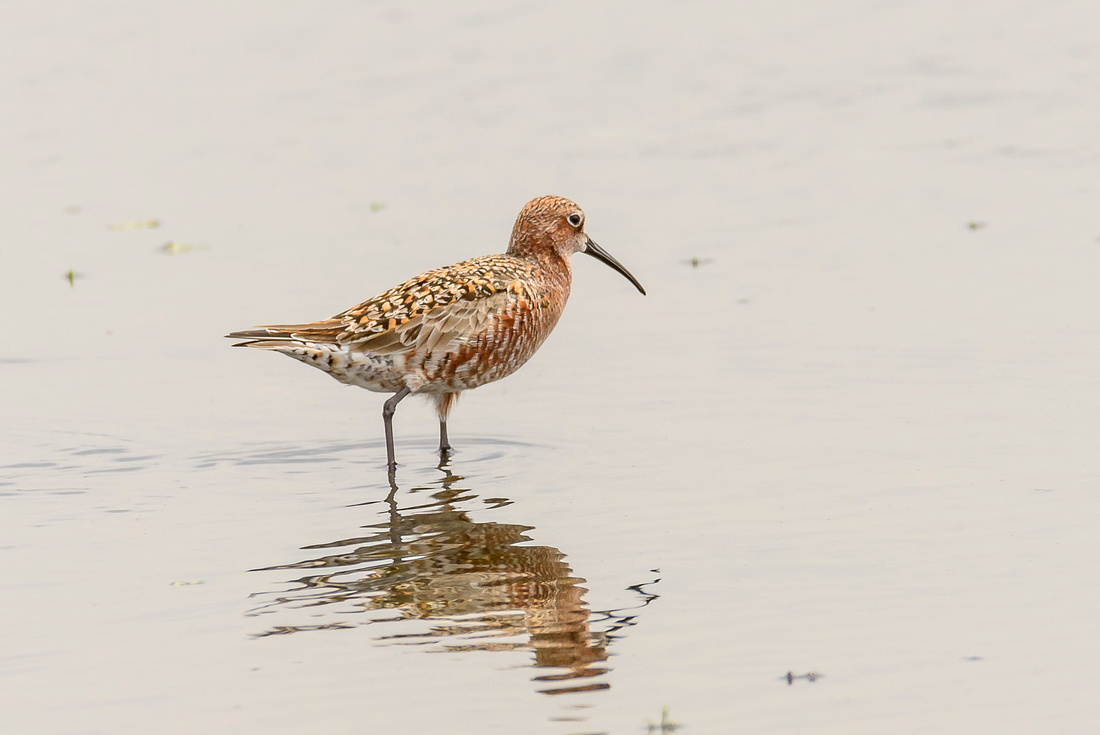 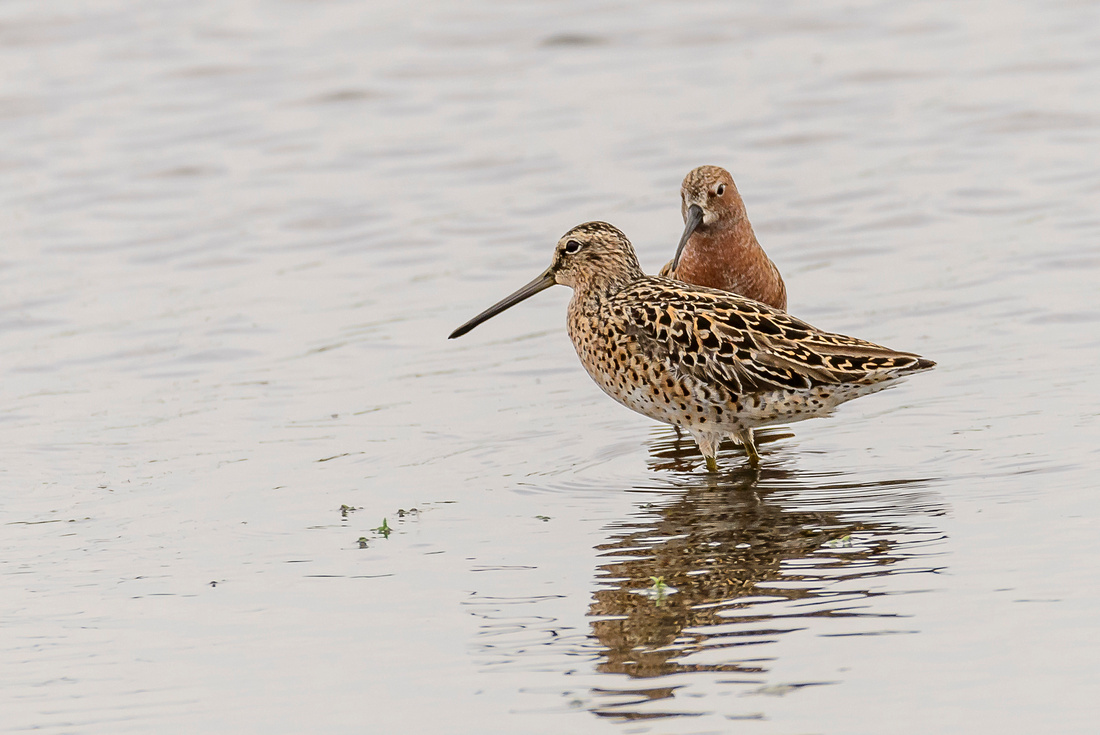 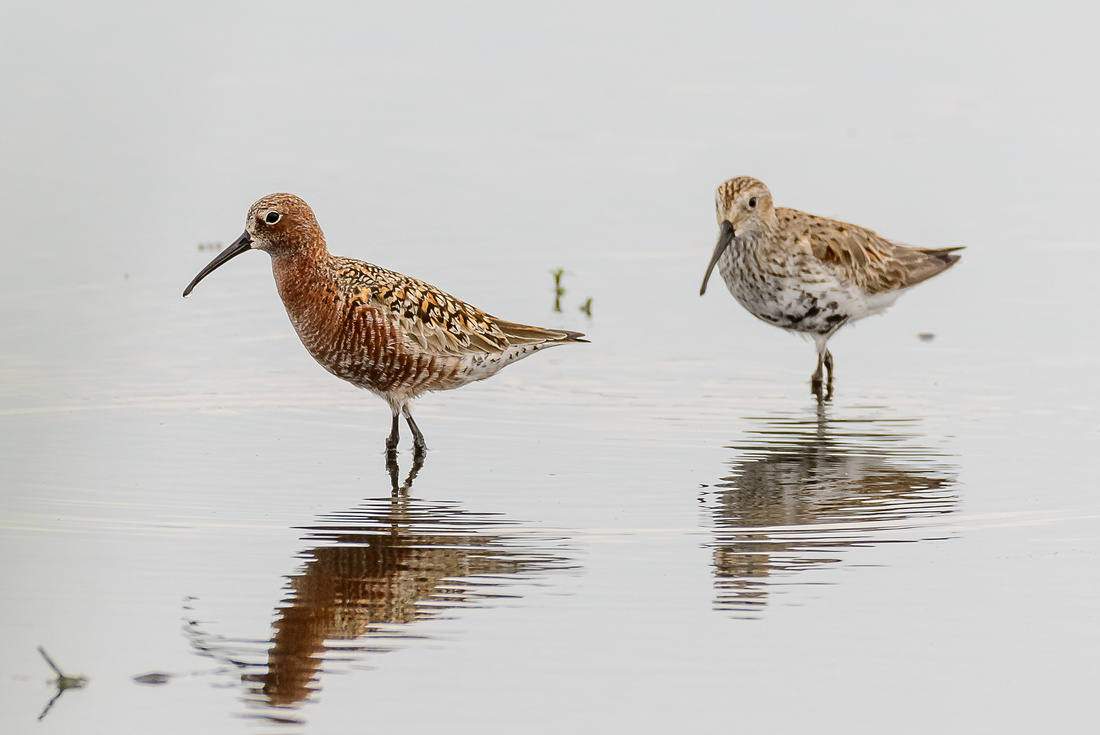 Mystery bird with Dunlin and Yellowlegs. 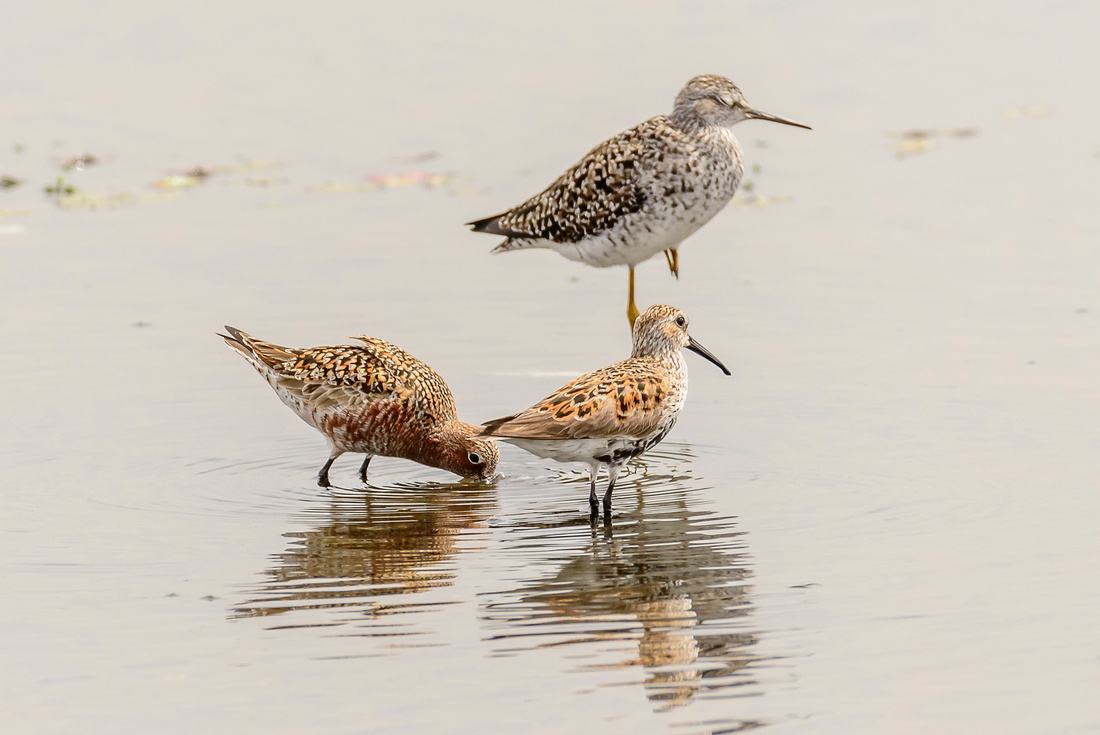 And a Glam shot.: 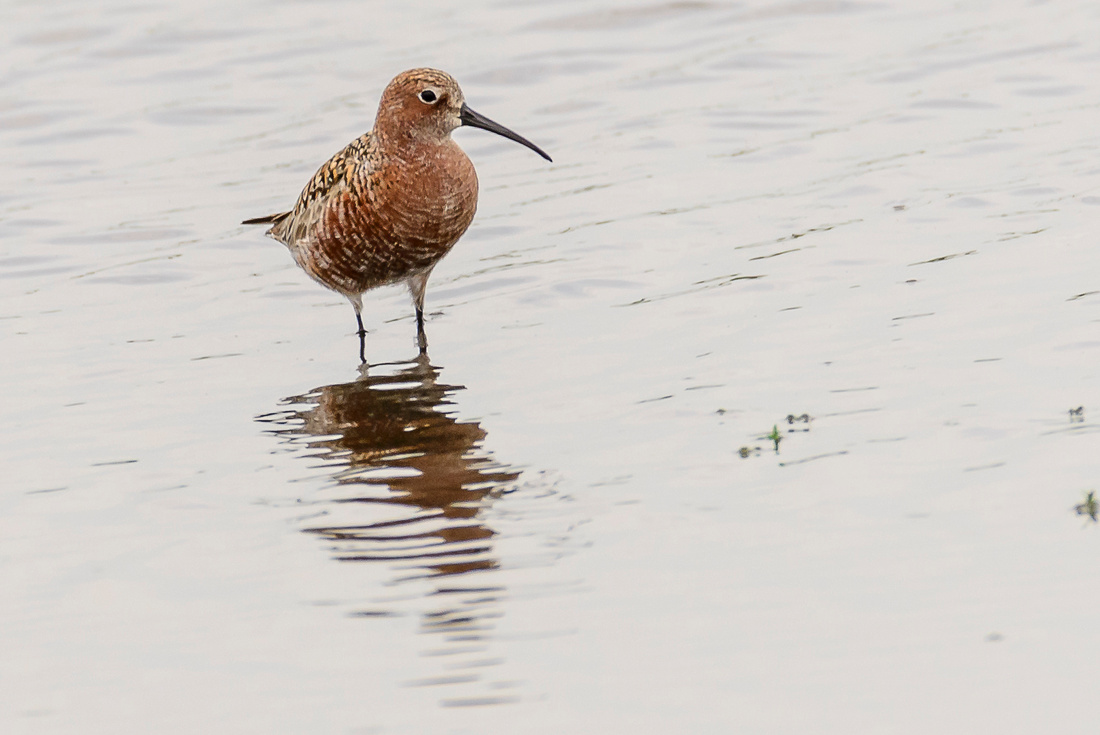 Then I went back to the truck and compared them to the shorebirds on my phone app (I have both Audubon and Sibley on my phone.)  I went through everything and the only thing I could come up with is Curlew Sandpipier...But I have been known to be wrong before, and sometimes pictures are wrong, so I do what I always do, post a cell phone picture of the back of my camera to the Birding Ohio Facebook page for confirmation of ID...see top.  Thinking that everyone would be out birding and that it would be a while, I began shutting down everything and got my GPS set for Maumee Bay to see what was there...

What followed..was CRAZY.  Checking before I got on the main road let me know that the ID was correct.  Matt was already back, shaking my hand and saying "Congratulations!"...but why the big fuss...oh well, I'll just keep heading East and figure it out later. By the time I got to Maumee, Tweets had been posted, my picture of my picture had been shared on the Ohio Rare Bird Alert and posted on the big screen at Maumee (which I didn't know until later.  If I had, I would have gone over and given them a better one. :-D) Buses of people were skipping their planned tour and heading for this little flooded field.  People were passing up on a KIRTLAND'S WARBLER for the Curlew Sandpiper...I didn't know it was on the wrong continent I didn't even know it was an American Birding Association(ABA) Code 3-Rare bird...I was too busy being up to my elbows in wet sand.

I didn't know that this is what it was starting to look like over at the flooded field: 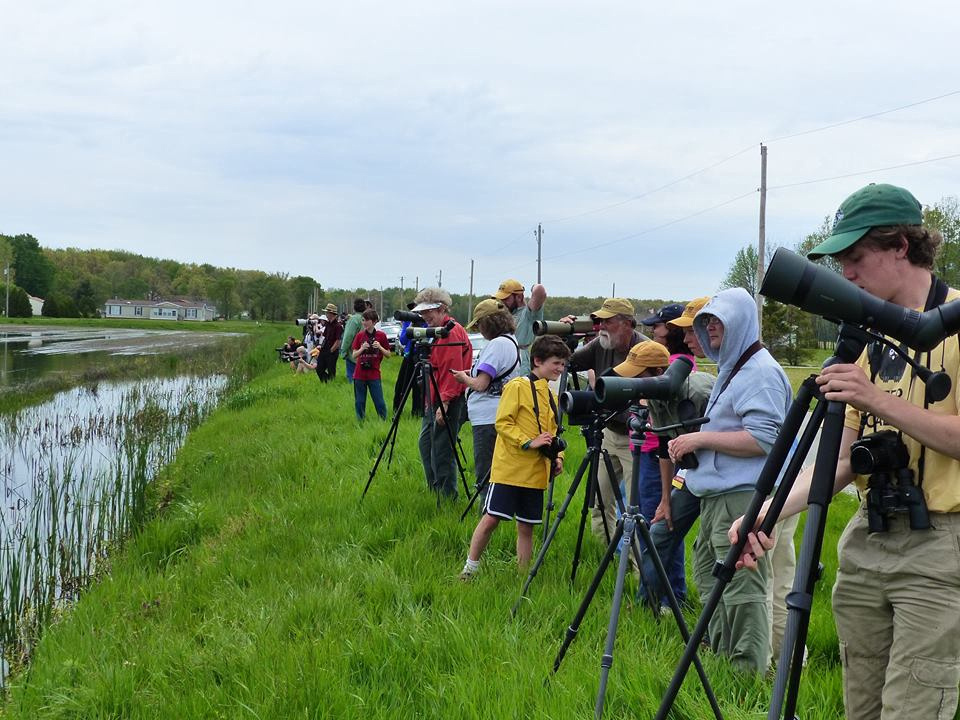 Birders looking for the Curlew SandpiperPhoto by Leslie Sours

I didn't have even a glimpse of the magnitude of this find until Kim Kaufman posted this on my original picture...:

...oh dear...having experienced a rare(ish) bird at my own feeder, I knew that the poor farmer was in for an interesting couple of days.

I continued on my planned trek and did the Ottawa Auto Tour before calling it a day and heading to Blackberry Corner for some quick photo editing, a shrimp basket and a piece of lifer pie!...and THAT was when I had an inkling that it was bigger than I thought it was.  People were seeing my pictures and coming up to me and asking if I was the one who found it..."Yeeeah"I said tentatively.  What followed was a half hour of sharing stories, and Glorifying God...and a sneaky paying of my bill. :-D

The next two days can only be described as the birding equivalent of being a rock star.  Everyone was either congratulating me, or telling their friends that I was the one who found the Curlew Sandpiper...Saturday is when I found out through Tom Bartlett that there were only 4 or so of these birds ever reported in Ohio...I also found out that so many people had gone over that a news crew was there.: http://www.wtol.com/story/31971611/birders-in-town-for-spring-migration-flock-to-springfield-twp-after-rare-bird-spotted

I was glad to hear the testimonials from other birders that made their way up right after work or dropping their normal tour route to go see it.  The best one had to be what someone sent me in my email:

"One gentleman came up beside me with his scope, found the bird, then announced:   "I drove up from Huntington, West Virginia.  This has been my nemesis bird for the past 15 years.  In the past I have driven up to 9 hours to try to see this bird, and when I get there, it is gone.  A lifer!”"-Jenny Bowman

Birders were helping others, older helping younger(and visa versa). For most the Curlew was a lifer, for some, it was one of many lifers.  From what gathered later, most people behaved and a good time was had by all.  It was also good to hear that people were coming for more than just the Curlew.

While reports are still being entered into the eBird webiste, so far 290 reports have been made by 253 birders...meaning for some, once wasn't enough...probably more like people leading tour groups. :-D At last report, there were 80 members of the ABA reporting it. Since not everyone eBirds or (like me) belongs to the ABA, the best estimate of the amount of people that visited this 1/4 mile strip was anywhere from 800-1500 people.  One suggested that it was probably more like 2500, but I think that is a bit high. :-D

I am thankful that God changed my plans that day...even though there wasn't a Red-necked Phalarope...and apparently it was a misidentified Wilson's Phalarope. I am also thankful that He put people in place who knew the enormity of the sighting. Also that this little gift was given for many more than me to enjoy. To Him goes all the glory.

SJLaRue Photography
Thank you so much for your comments. I really appreciate them.
Debbie(non-registered)
THANK YOU FOR YOUR FIND!!!!!!!!!!!!!!
Rachel Shamy(non-registered)
I LOVE this!!! To think you ended up on my road at my neighborhood flooded field was CRAZY!! But what I LOVE the most is you giving GOD the glory!!! I ALWAYS thank Him when He blesses me with WONDERFUL sights of his MAGNIFICENT creations!!
Trish Shaffer(non-registered)
Very neat story of how a common man can become a "rock star' in the matter of a few hours. Thanks for sharing!
No comments posted.
Loading...