Florida Is The Place For Plovers

I was given the opportunity in late October to travel down to Florida to attend a Memorial service for my grandmother. She was a beautiful God fearing Christian woman who wanted to be buried with her husband in Florida. My work allowed me 3 days off, but I also was able to take another three days vacation. So I decided to go down and see how many life birds I could get in the week I was down there.

However, since I was going into uncharted waters, I needed to get as much info as I could so that I could make the most of my week. Florida is a big state, with many places to go birding. I had a general idea that I needed to spend some time on both coasts, but where were the best spots for the birds I needed? In an effort to narrow down my area, the first thing I did was send out feeler emails to my Ohio bird watching email listserv and Facebook group to see if anyone could give me some direction as to the better places to go...I got close to 100 replies. I was able to narrow it down to three areas in Central Florida.  The east coast was Merritt Island National Wildlife Refuge Area. West coast was Sanibel Island/Ft Myers area. In inland central Florida there were a few places mentioned that I would check out only if I couldn't find what I was looking for elsewhere, but I never got the time to go check them out...something for later I guess :-) . Also among the responses were a couple Florida birders that follow our Ohio email listserv. They were able to give me some more local spots around Sanibel and Fort Myers area to check out, and one offered to give me a driving tour of some of the better ones...I love locals :-).

In the week I was there, the weather was simply beautiful. My local birdwatcher/guide told me that the week before, the temperatures were in the 90s, I had one day in the upper 80s.

So with 5 days of birding ahead of me, the chase was on. I had many experiences that I want to write about. I struggle to decide what to write about first. So I guess, I will start out with the birds that I REALLY wanted to see and photograph.

There are a few shorebirds that are found in Florida that do not come up to Ohio, so I really wanted to focus on getting them. Two that I wanted to get were Snowy and Wilson's Plovers. According to eBird, both are found around Ft Myers. However one, the closest Snowy was an hour north of Ft Myers on Siesta Beach, and the Wilson's is found a little south of Ft Myers on Bunche Beach (which I found out from the locals is best only during low tide.) So I needed to plan the day so that I could get both birds with the focus on being at Bunche during low tide.

One of the things that comes up again and again for watching shorebirds in Florida was to watch the tides. Here in Ohio, I never have to worry about the pull of the moon...except maybe Lake Eire and "Full Moon Fever" at work :-D. But in Florida, everything around the water, centers around the tides...from birds to shell collecting, everything is centered around the tides. So if you want to see the shorebirds that rely on sand/mudflats for foraging...you have to be there as the tides are receding.

So with the tide chart in hand, I planned to go north in the morning and end up at Bunche at late afternoon...which was actually perfect since my hotel was on the same road as and only a mile away from Bunche. ( I had not planned this, my only concern was cheap comfortable room near Sanibel Island.)

Snowy Plovers at around six inches long are one of the smallest shorebirds. In the US, they breed mainly on the Gulf coast with pockets of them found out west, inland. They like wide sparsely vegetated beaches, and blend in really well along the undeveloped white sand dunes of Siesta Beach. It took me over an hour to find them, and I had almost given up when I nearly stepped on them. Fortunately for both me and the plovers, a Sanderling flushed and I looked down. 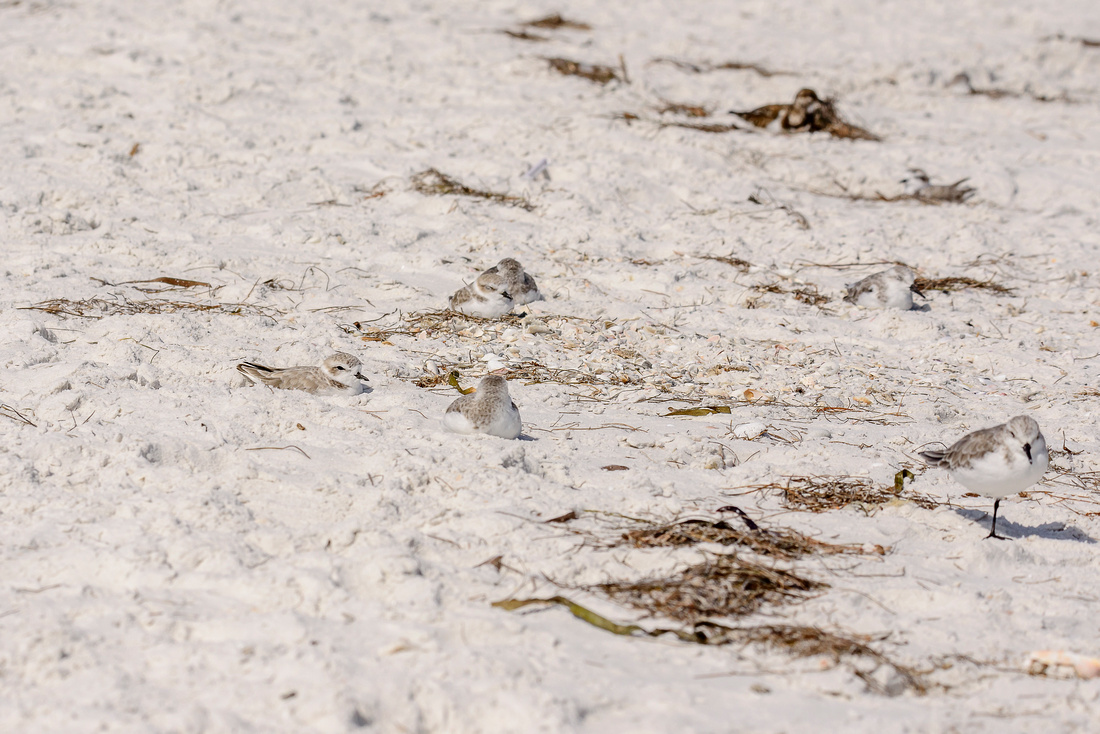 In the picture above, there are six Snowy Plovers, a Ruddy Turnstone, and a Sanderling. All just chillin' on the beach. Here are a few closeups of the Snowy Plover. Click on any picture below to be taken to the gallery of all the pictures I took of the species. 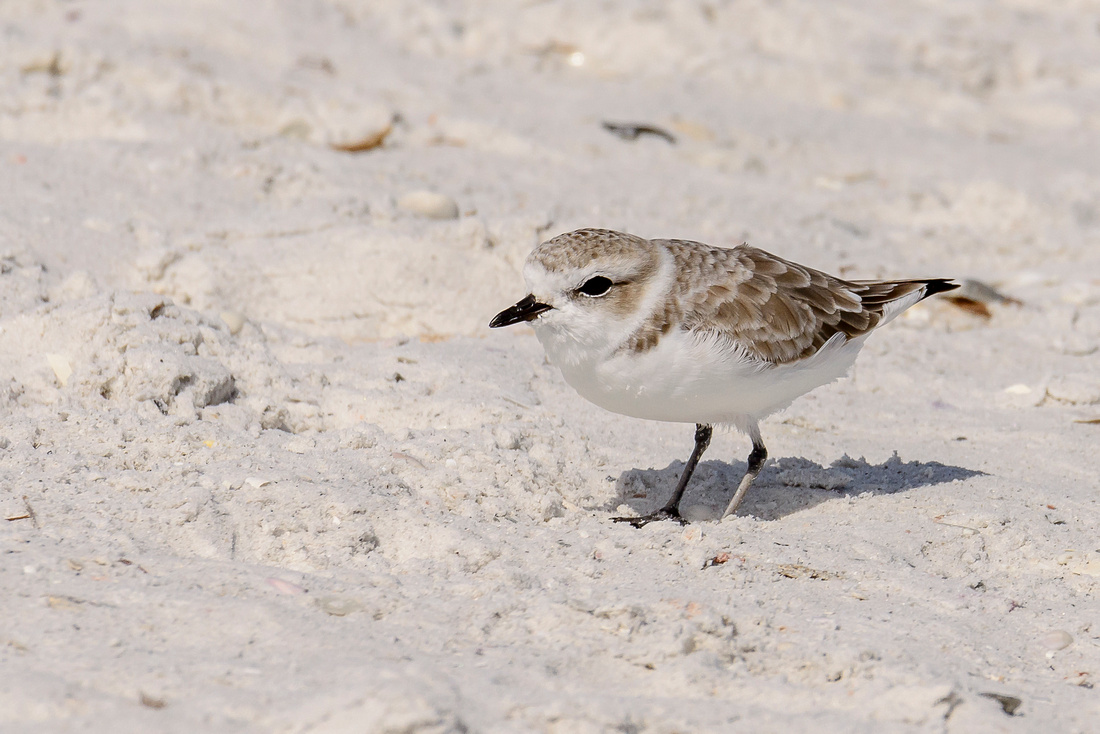 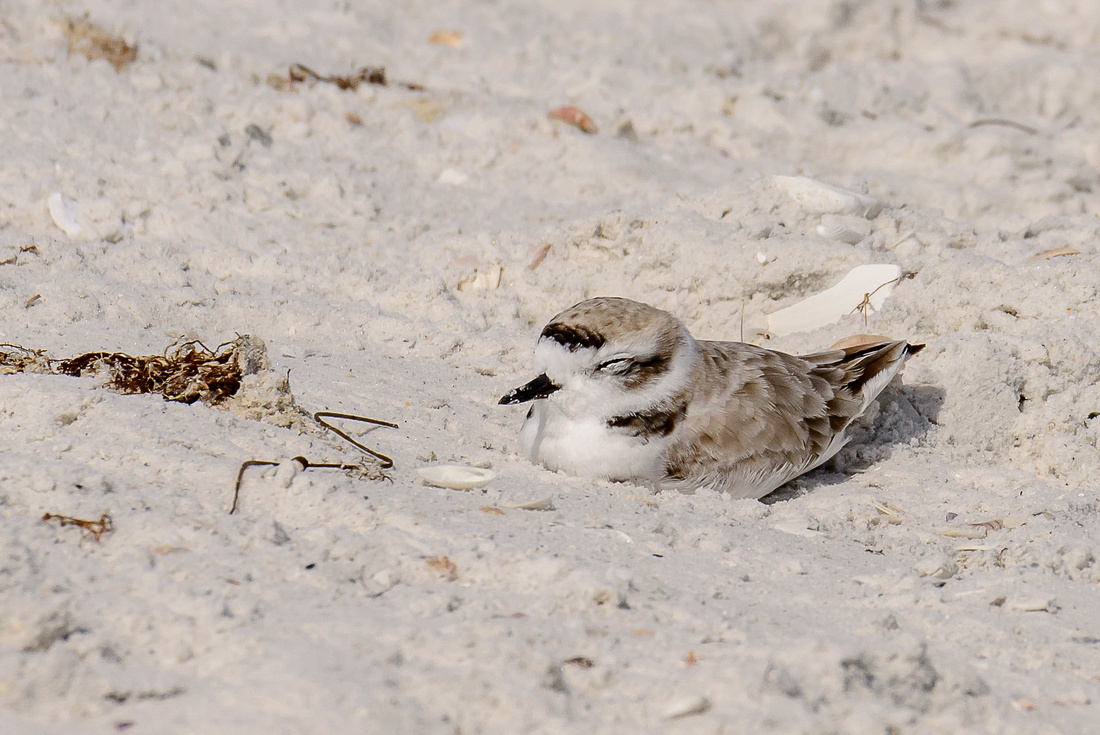 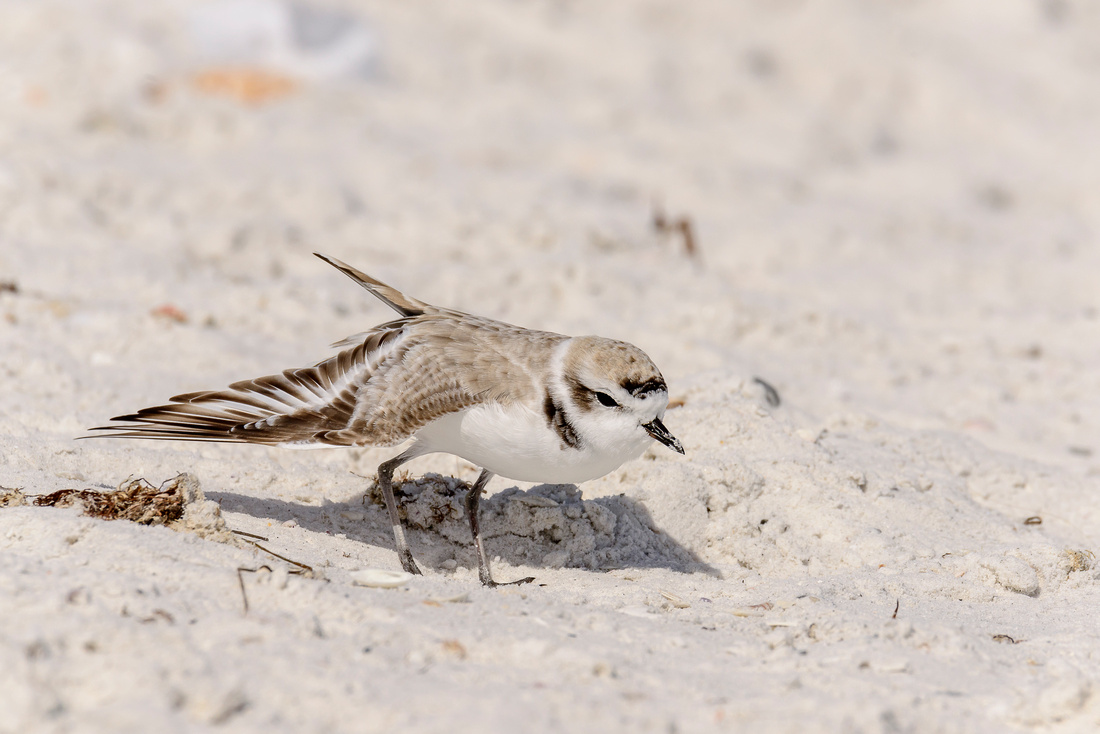 The Wilson's Plover is about six to eight inches long...which is roughly the size of the Semipalmated plover that I am used to in Ohio. It is a coastal breeder The big glaring difference that makes it stand out from it's plover brothers & sisters is is bigger bill. 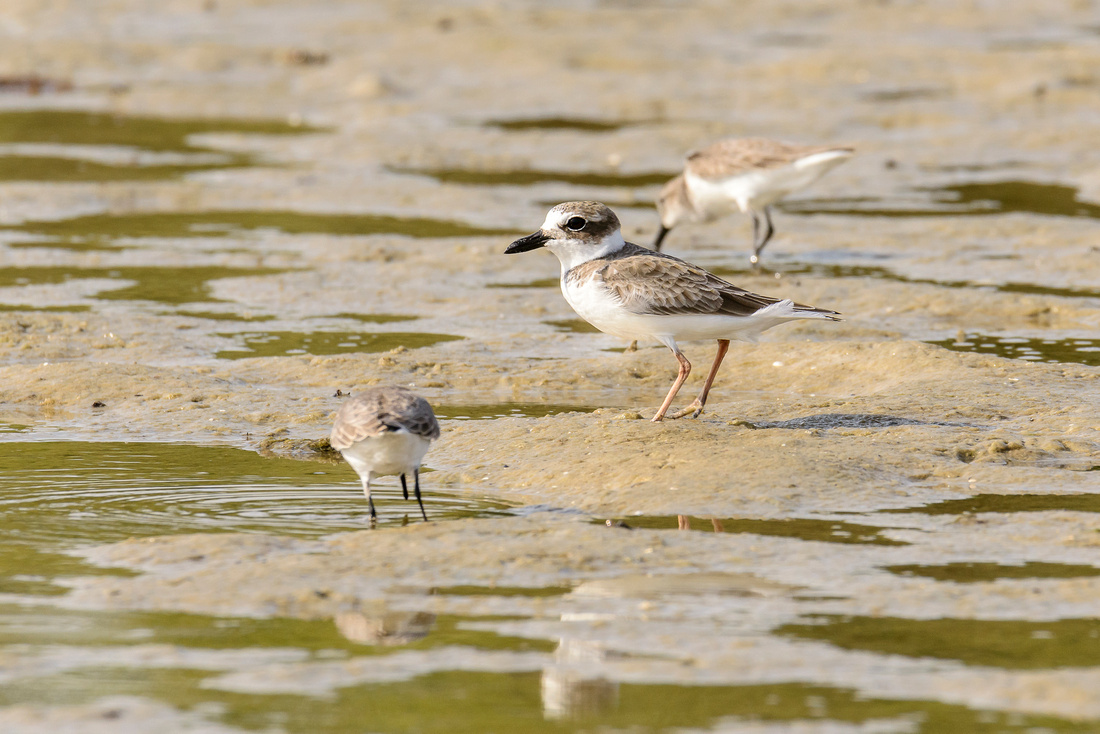 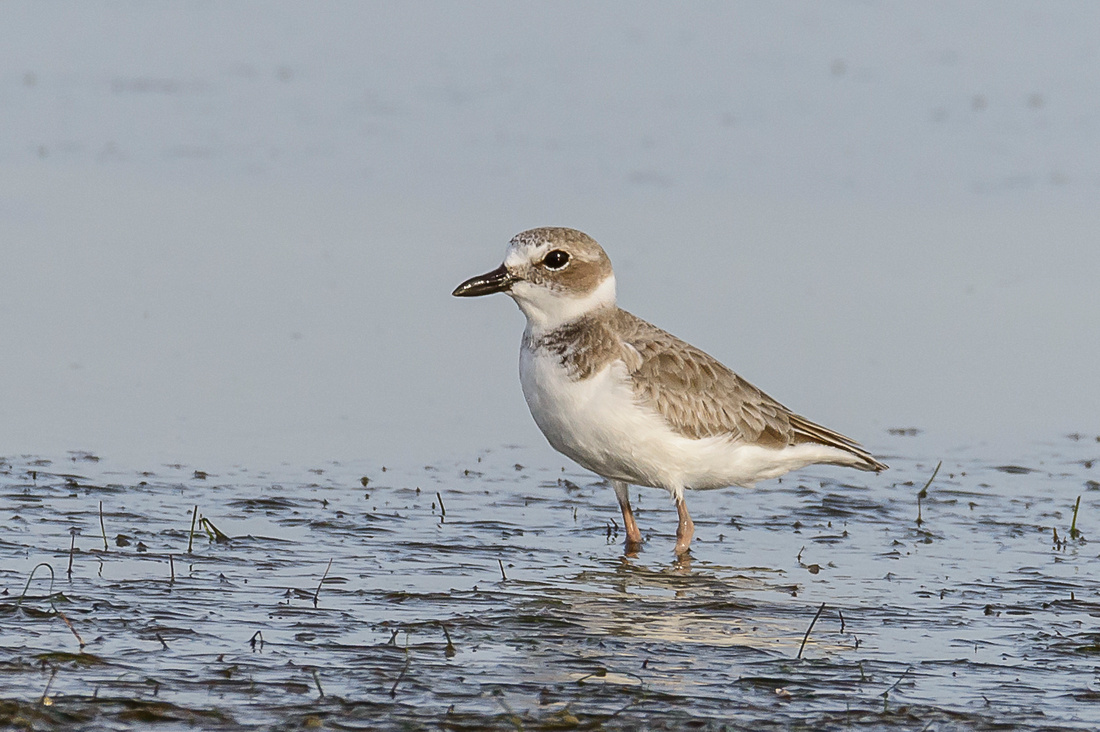 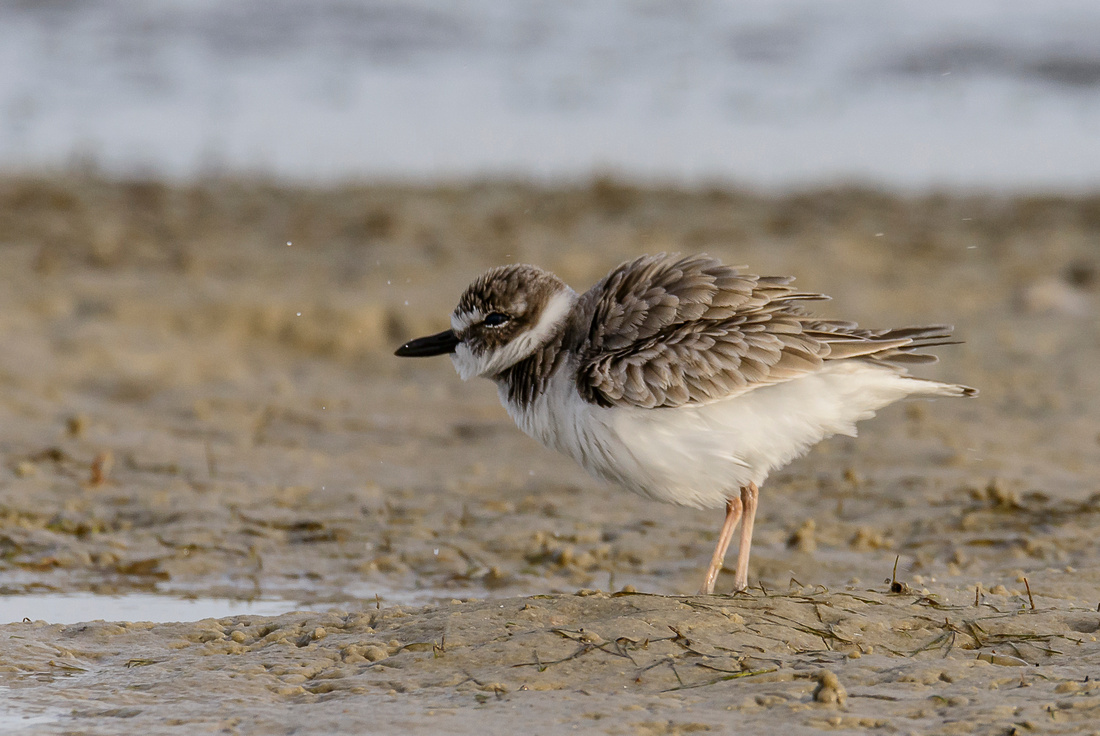 Both these birds are in somewhat declining populations due to habitat loss. In fact, the only reason why either of these species continues in the Gulf is thanks in large part to the conservation efforts of the Fish and Wildlife Service, and the National Wildlife Refuges, with a few pockets protected by private landowners and improved zoning regulations along Florida's beaches and dunes.

For more info on what you can do as a tourist/birder/photographer the Florida FWS has posted a few things in their website as well as a PDF brochure.:

Basically keep out of posted nesting areas, don't harass the birds, keep your dog on a leash, and pick up after yourself to reduce scavenger predation...pretty simple stuff, although I would add to keep a good eye on your kids at all times as well, but you should already be doing that ;-) .

While these were my primary plover targets, I was able to see four other plover species: 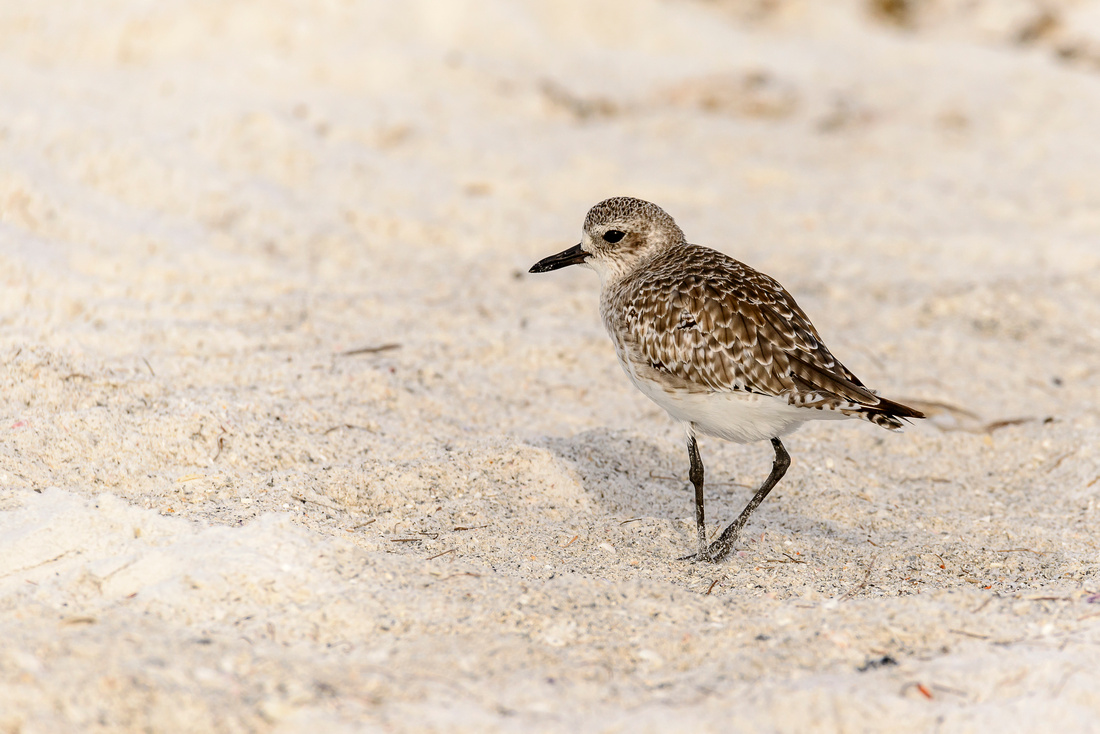 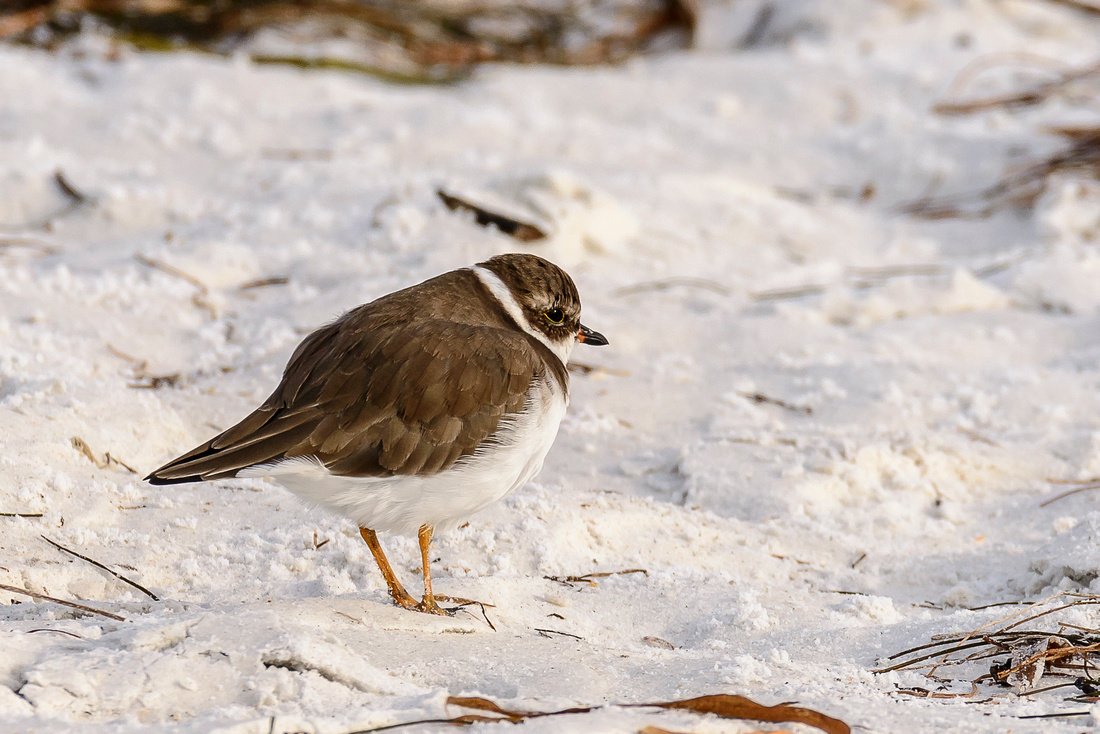 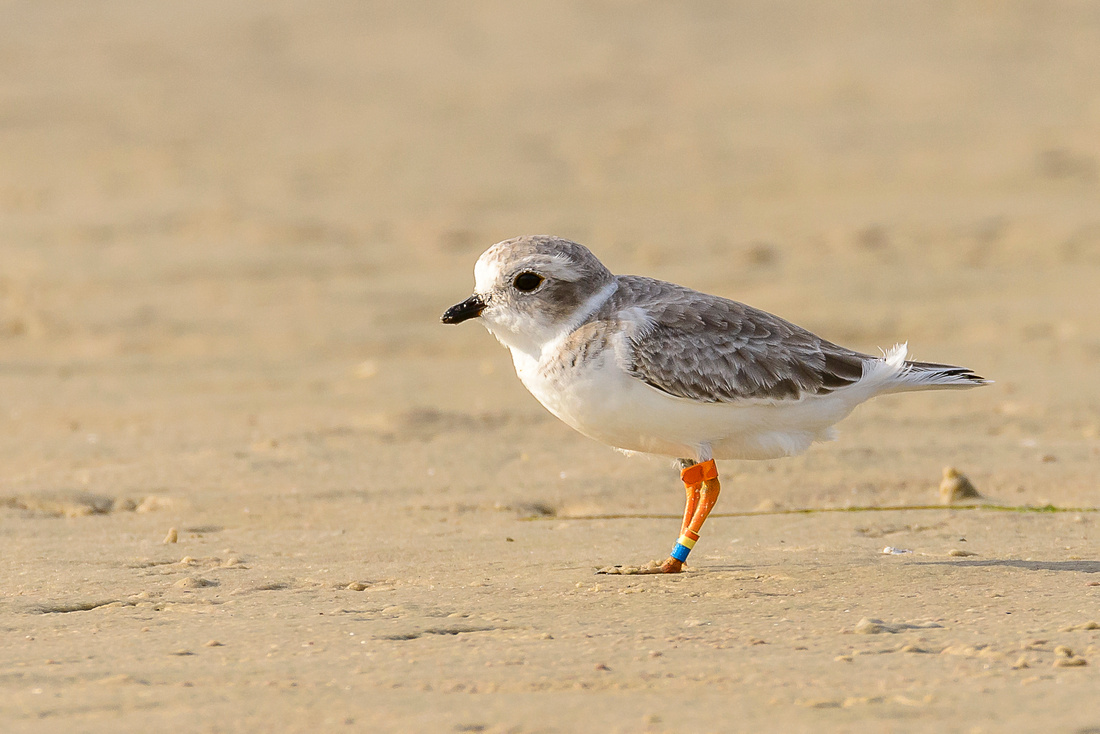 Bunche Beach/San Carlos Bay Preserve is owned by Lee County, and their information page can be found here:

Parking is $2 an hour, and there is a place for kayaking..I really should have stayed here an extra day. :-D

Siesta Key Beach is in Sarasota and their page is here:

FREE parking! I found the better shorebirds on one of the side parking areas instead of the main groomed beach.  Even though there were plenty of Terns and Skimmers taking a break on the main beach, the shorebirds found the beach apes too distracting, so they were hiding/chillaxing in the less developed dunes to the north of the main beach.

Here is a link to The Great Florida Birding Trail, to help you plan your trip to some of Florida's birding hotspots:

...more about the Piping Plovers and other banded birds I saw next week.

Tom reed(non-registered)
Hi, can you explain the comment about red yarn and house sparrows? Thanks