I was given the opportunity to go to Arizona on business, so I made sure to pack the essentials; the one or two tools I would need, two or three changes of clothes, and almost all of my camera gear. I never give up the opportunity to pursue my hobbies when I am not working. So given that Phoenix Arizona is one of the top birding hotspots...and I do mean HOT!...and the scenery is fantastic.  So most of my birding and camera gear took up my luggage space.

Now, I had never been to Arizona.  Heck, I hadn't really been on an airplane since 1999/2000. I did make one trip to Canada after 9/11,  but this was the first time I really was experiencing post 9/11 airport security.  I had no issues with security...they had to take two TSA employees outside for fresh air after I removed my shoes...but I got through fine. :-D I AM JUST KIDDING.  TSA, PLEASE don't come after me.  The only issue with my trip out was that I had to spend 8 hours in Detroit...waiting for a seat...UGH!

Before leaving, I got in touch with Norm Beer of Digital Sandbox Studio, LLC, one of my Facebook friends that lives in the Phoenix area for places to visit while I was there.  He and the local photography group were able to give me some great ideas for scenery and food.  I also posted on my Ohio Birding group for birding ideas, and between the two, I was able to more than fill all my free time with great birds, great scenery, and great food.

I have discovered that when you are going to bird an area that you are unfamiliar with, that first, you find out what is there...hello eBird! Maricopa County so far this year has had 267 species, almost a hundred of them were lifers for me...I didn't have that kind of time, so I had to do the second thing that I have discovered about birding and photography; set a goal of 3-5 important to you birds, and direct all of your attention to getting those birds...the rest are just icing on the cake.  So my 3 were American Avocets, Burrowing Owls, and Cactus Wrens.  Avocets because I keep dipping on them.  The Owls, because they aren't here in Ohio...and they are cute.  And the Wrens because they are just an awesome "little" bird.

Joe Neely, one of my other Facebook friends is a nature photographer, and was as big help in locating great locations for photographing most of the birds.  He put me on to the Glendale Recharging Ponds, a waste water treatment facility as well as an eBird hotspot.  He also had  some great locations for owls.

The first spot I went to were the Recharge Ponds for Avocets and other water birds. The very first thing that greeted me were Avocets...Well that was easy. :-D 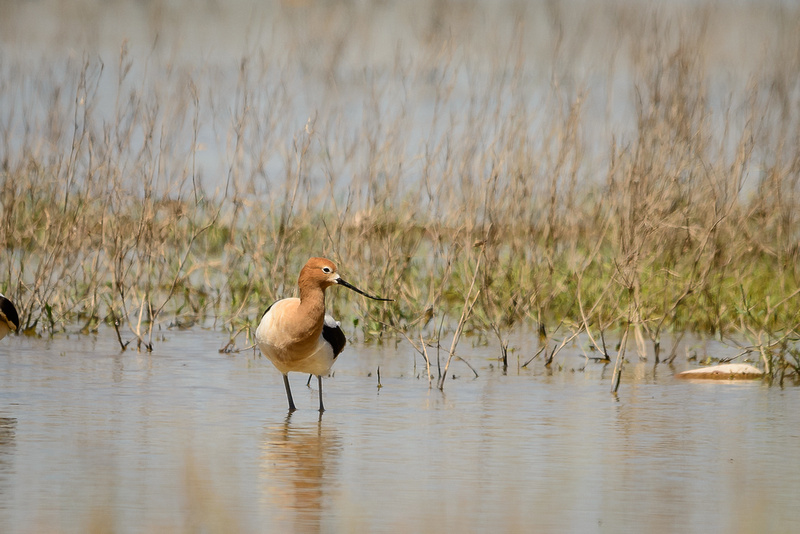 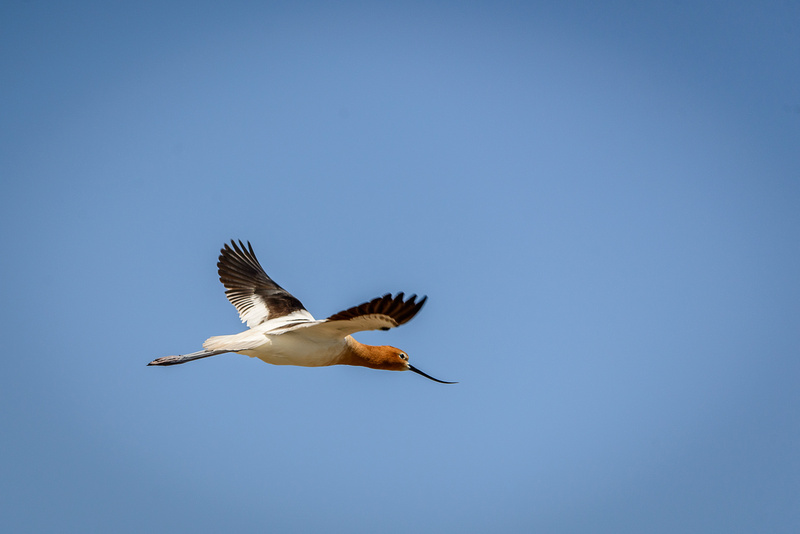 I also had some other good birds while I was there. 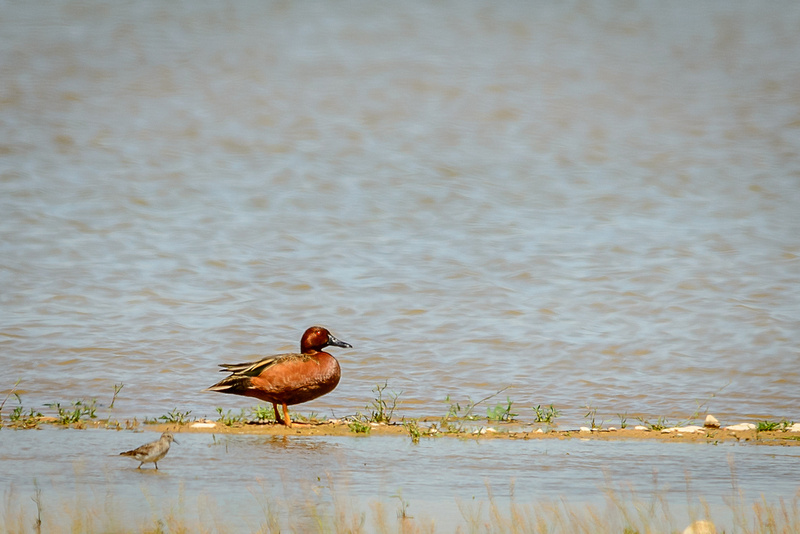 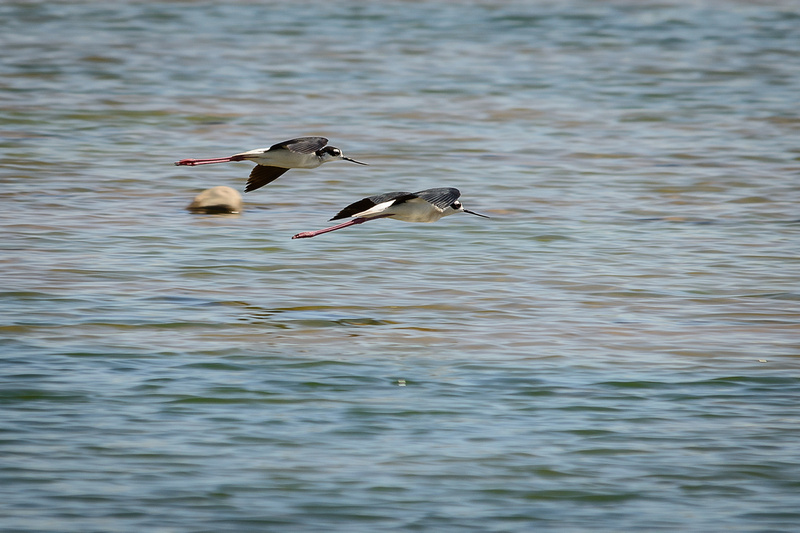 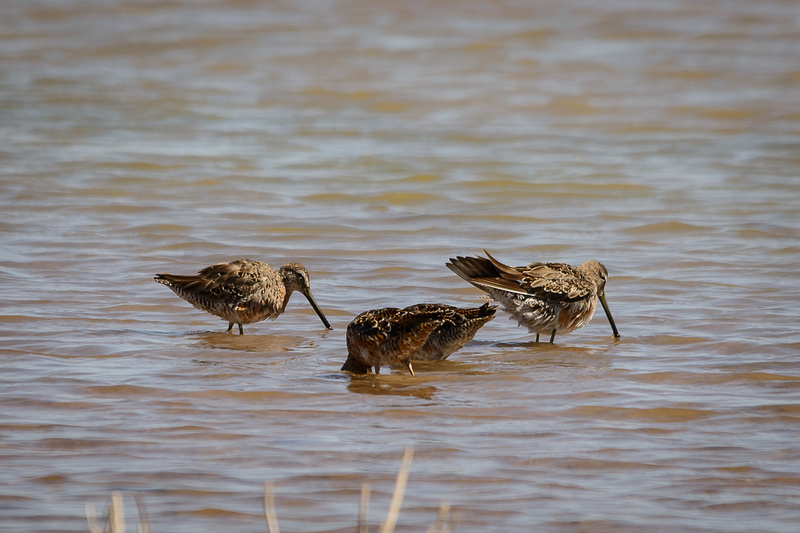 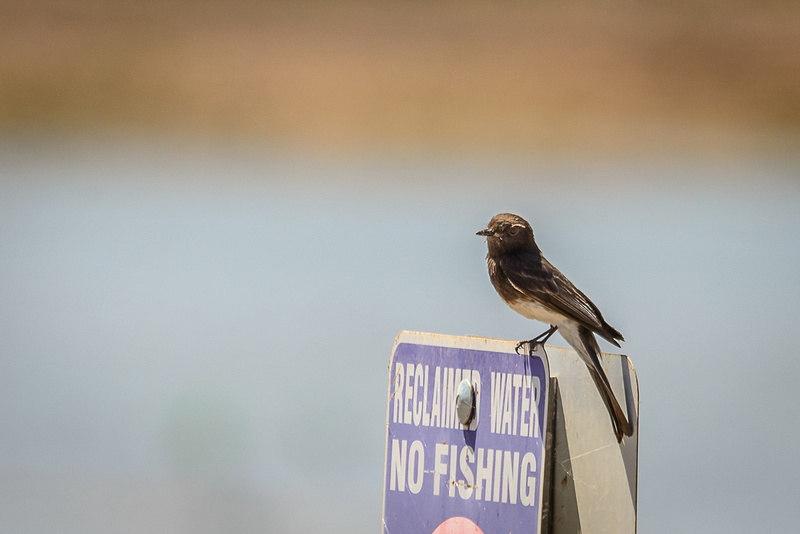 On to my second bird, the Burrowing Owl.

Now this is where I take to task how Phoenix/Maricopa County is laid out...The same road will be on both sides of the city with nothing in between.  So when you do go to an unfamiliar birding spot...make sure your GPS is set correctly...mine wasn't so I went to the wrong side of the city...but I still got some cool life birds. 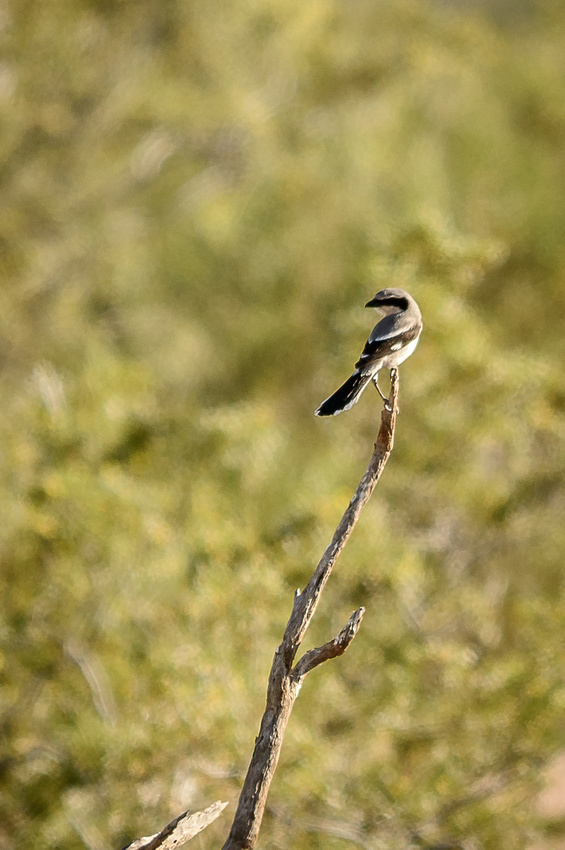 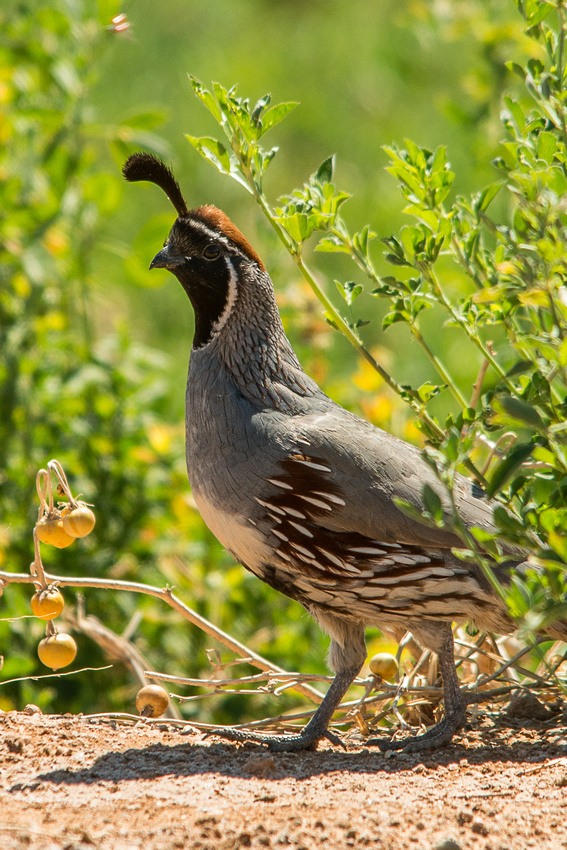 And another one of my nemesis birds that I wasn't expecting. 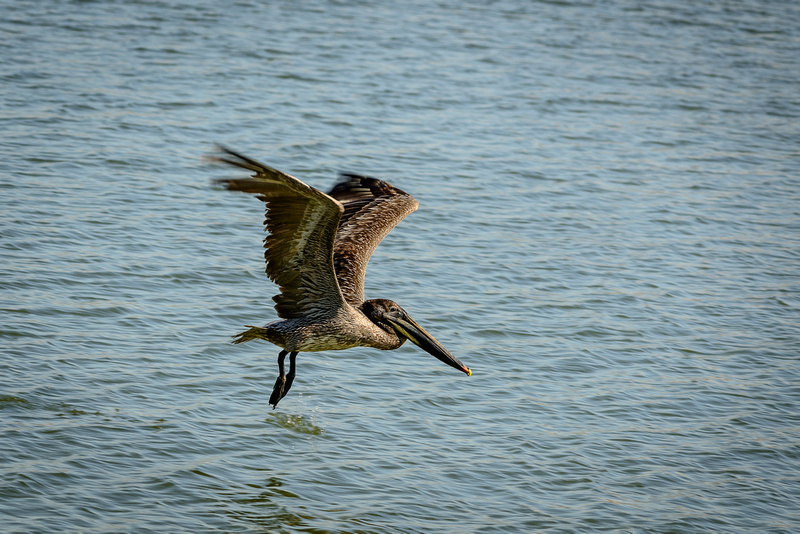 However, this wasn't getting me to my goal bird.  As I was heading back down the interstate towards the hotel.  When I happened to see an exit that had the same road name as the other I was on...I then knew what happened...so with less than an hour of useable daylight left, I was back on the "hunt"!  Almost immediately after leaving the interstate: 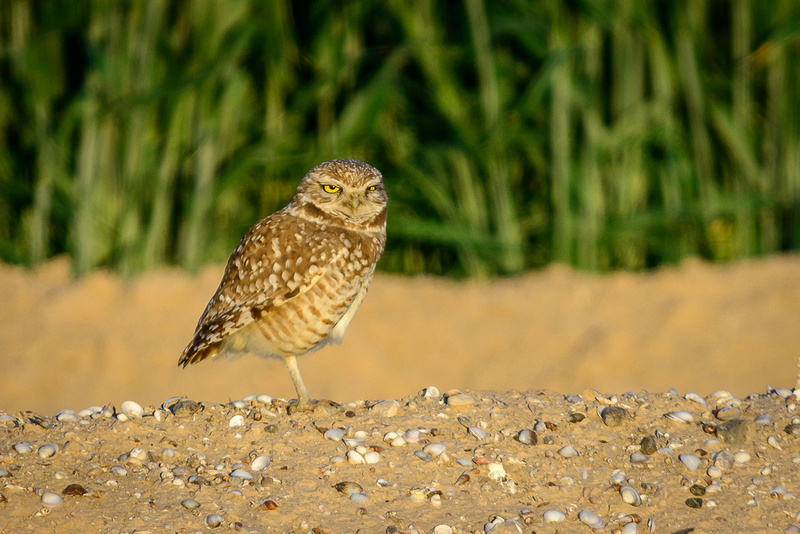 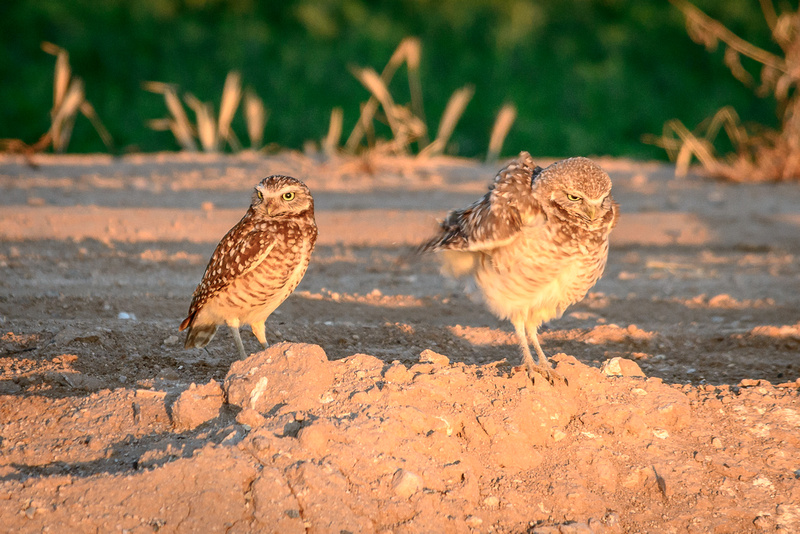 Day one, two of my goal birds were checked off...along with a  few extras. :-D  On to day two!  The second day I had less daylight so I stayed nearer to my hotel so that I could get the most in for the time I had.  Using eBird I found that there were Cactus Wrens seen nearby at White Tank Mountain Regional Park...but no locations were given in the notes.  With limited time, I asked the attendant where they would be, but they didn't know either...BUT they did know where the birders like to hang out...so it was off to Area 4...a picnic area with a nature trail....Oh yeah! I can see why the birders love this area.  Lots of good birds here.  Immediately there were 5 Cactus Wrens, two different woodpeckers, and a Curved Bill Thrasher. 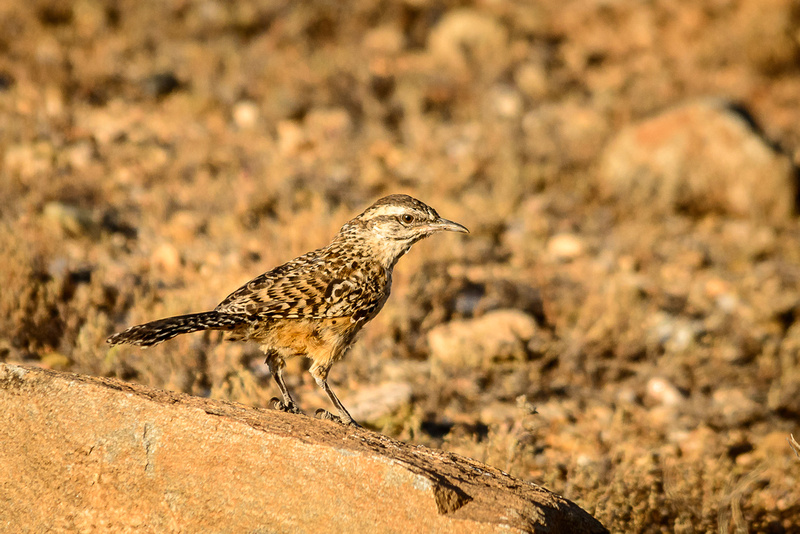 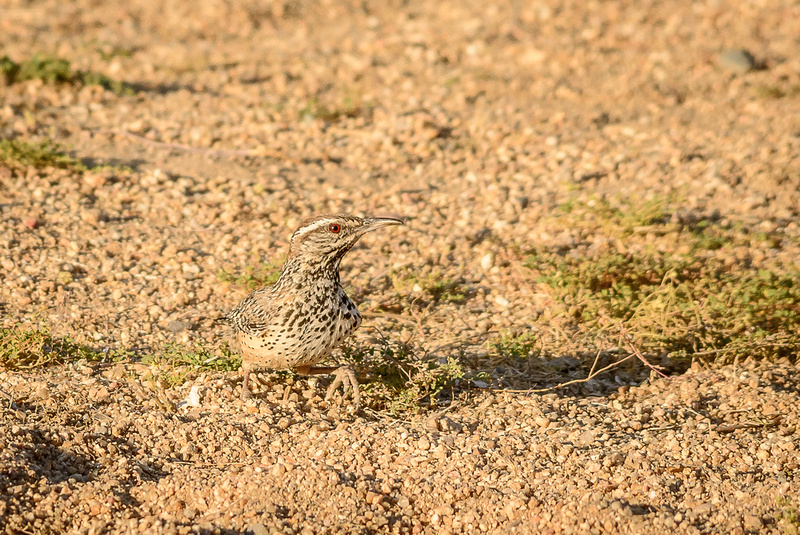 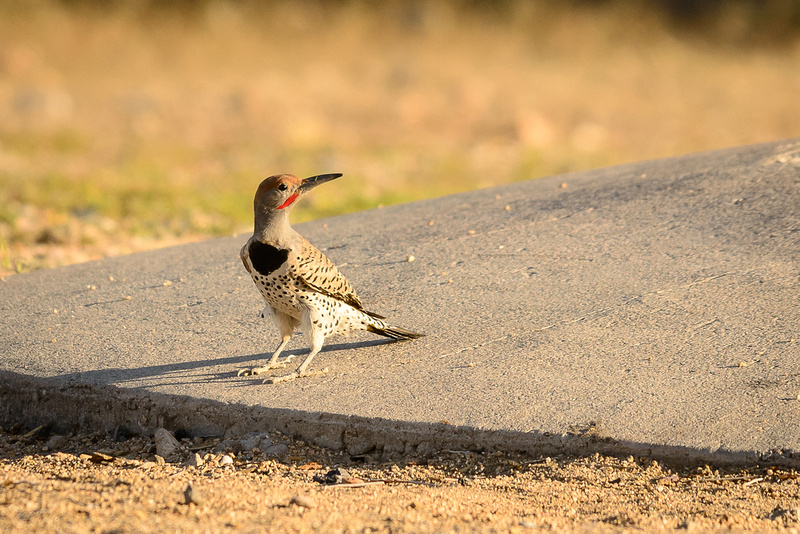 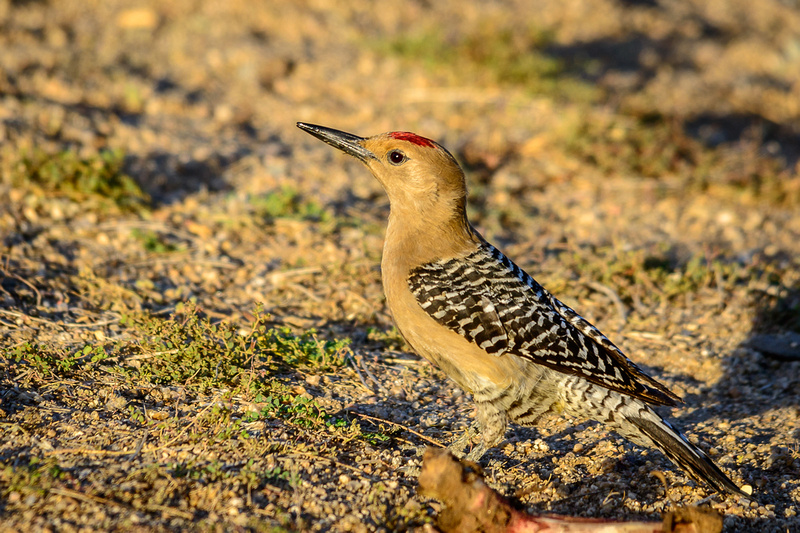 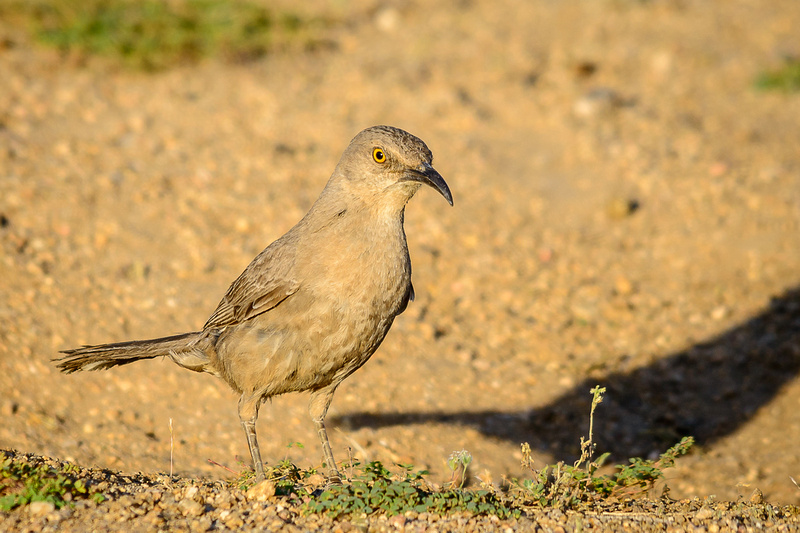 By the end of day two, my personal goal was accomplished! So day 3 after work, I went out with my friends to do a little birding and catch an Arizona sunset.  So first my birding friend and I went to an undisclosed, but very public location tho check on a nest of Great-horned Owls. Hundreds of of people drive by this nest everyday...and only a few have seen it.  This is just a concrete planter decoration bowl on  top of a bridge.  On the street side, it is only 6-7 feet off the ground. on the other side...it was 50...so when you look at the whole scene, it looked to be really defensible.  But if you were just looking at it from the street, you would think, "What is she thinking?" 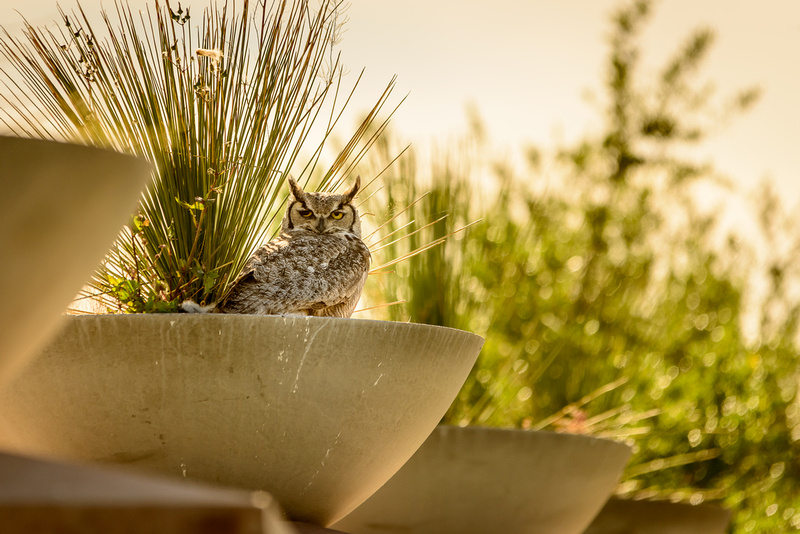 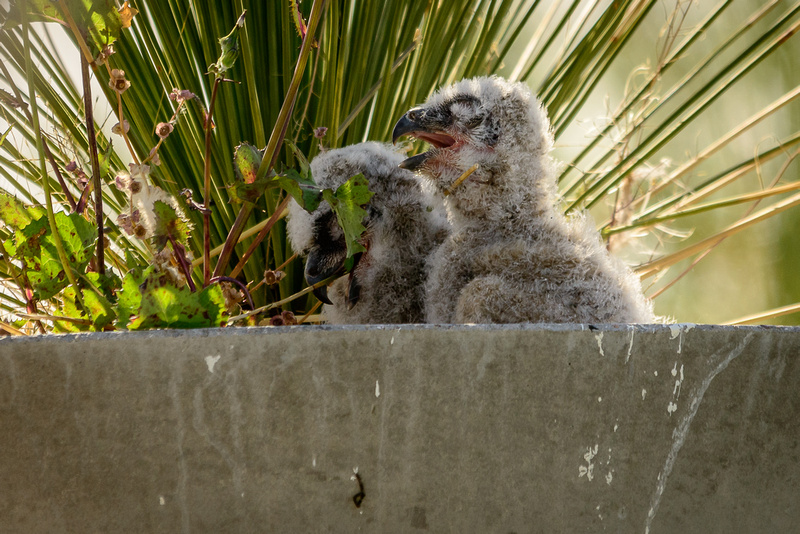 I had juuuust enough time to get over to my other friend Norman's place so that he could guide me up the side of a mountain to get some good sunset shots...and more importantly, SAFELY back down again. :-D 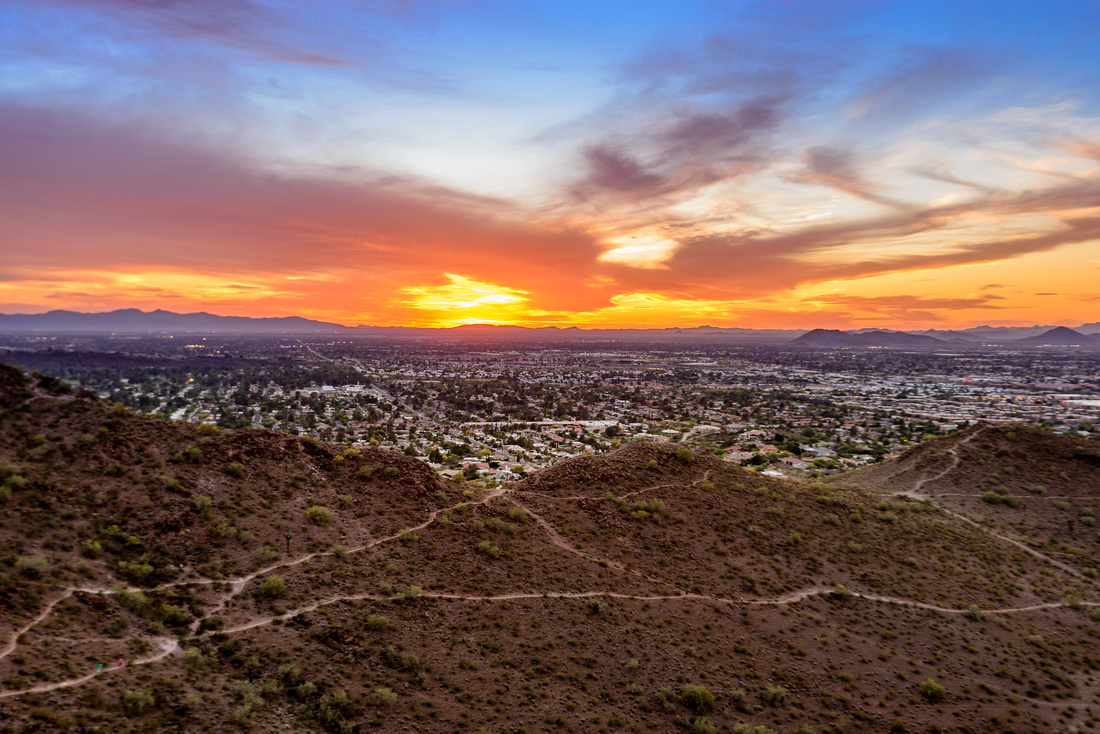 My final work day in the Phoenix area was devoted to cleaning my room, packing my bags...after work of course...that took ten minutes.  So I had enough time at the end of the day to just walk about the hotel and local city park...to bird of course. :-D

Surprise Arizona city park  had been reported as a good place to get some western hummers, so I set out to knock some more lifers off my list.  turns out, I knocked more water based birds and flycatchers off my list than hummers...I did see a lot of hummers, just not slow enough to ID and photograph. :-D 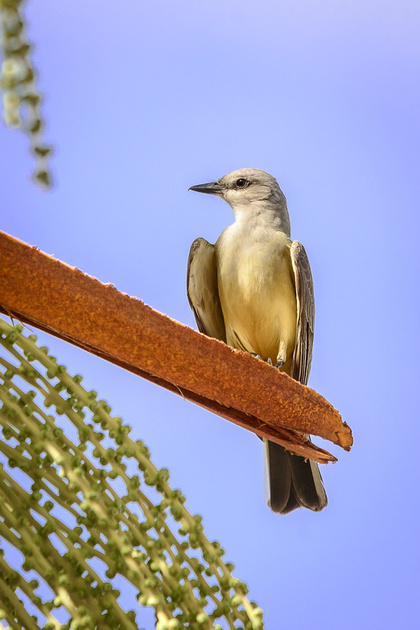 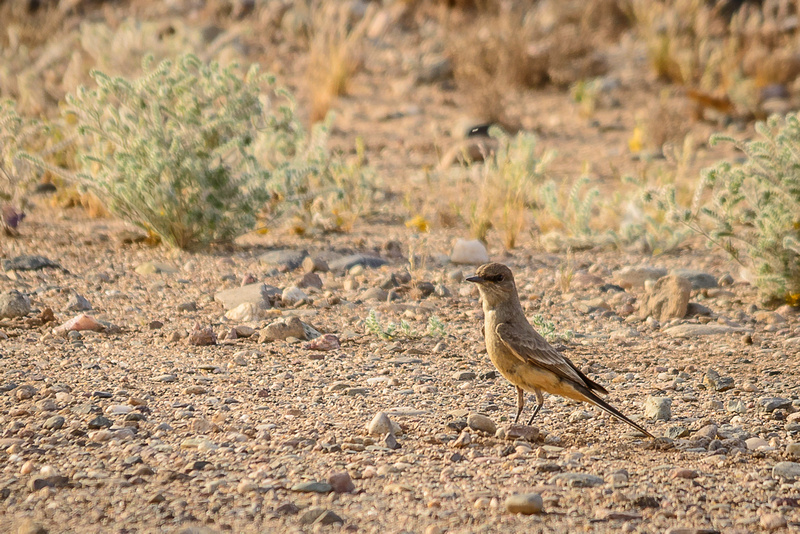 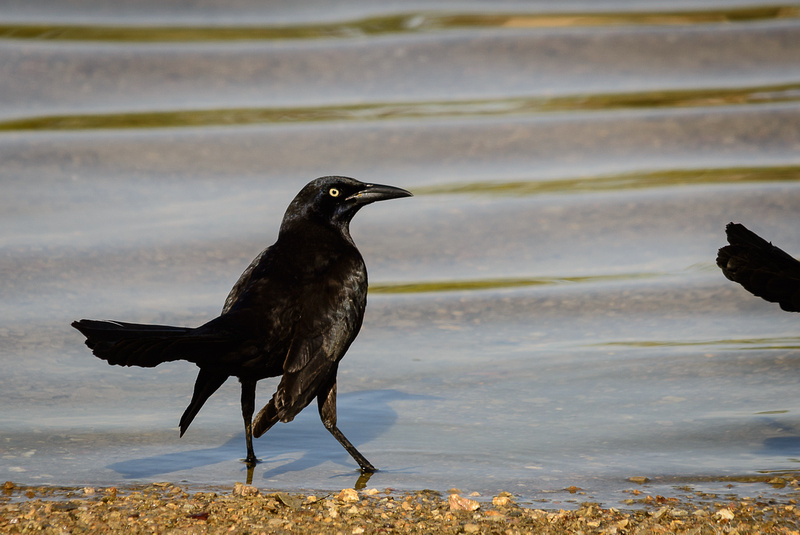 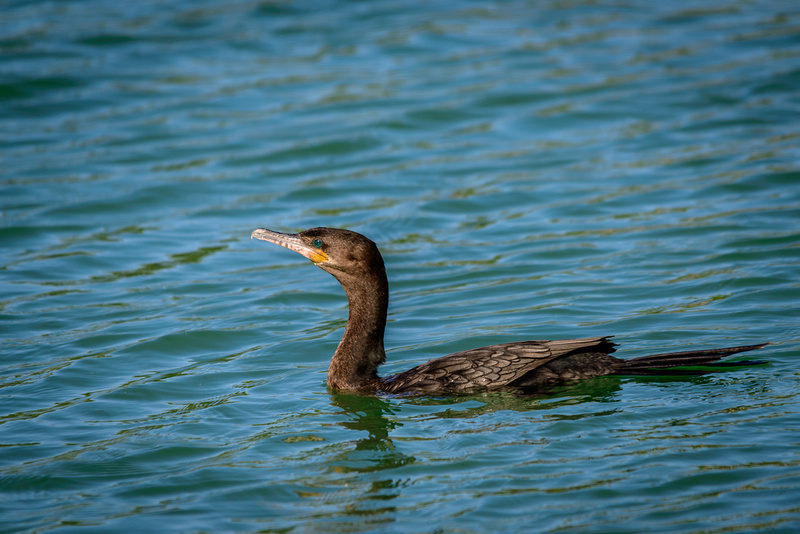 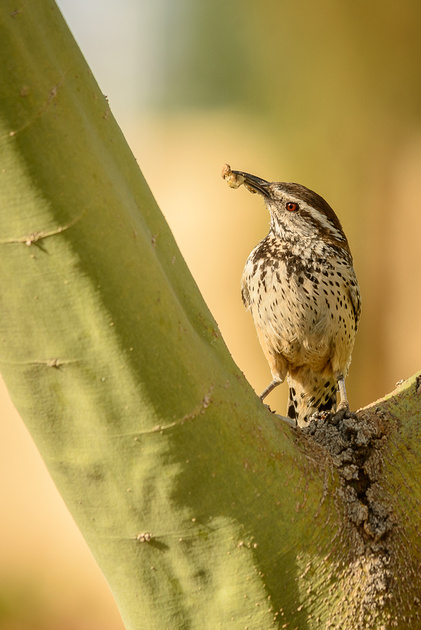 I had to get back to my hotel to finish packing away my camera gear, so after a quick hike back towards the hotel, I was getting ready to cross the road when a blur of feathers blew right by me...I turned to look to see an Anna's Hummingbird just resting on a branch...almost saying take a picture of me...so I did. :-D 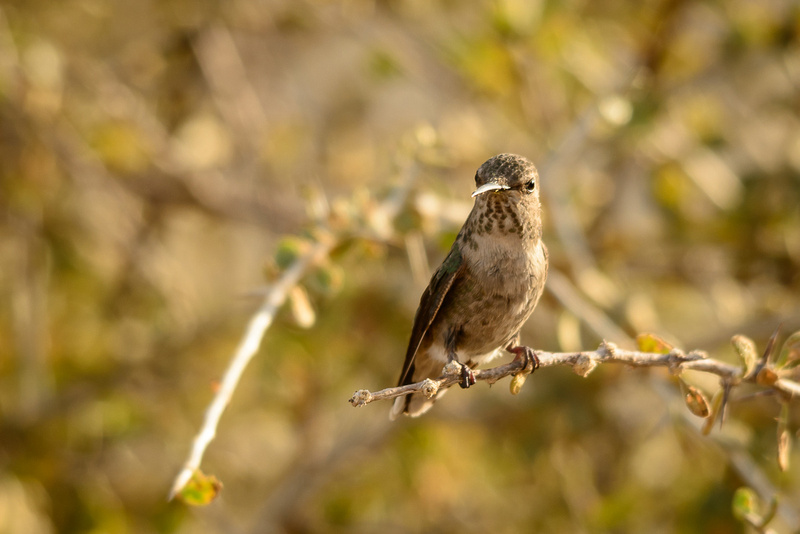 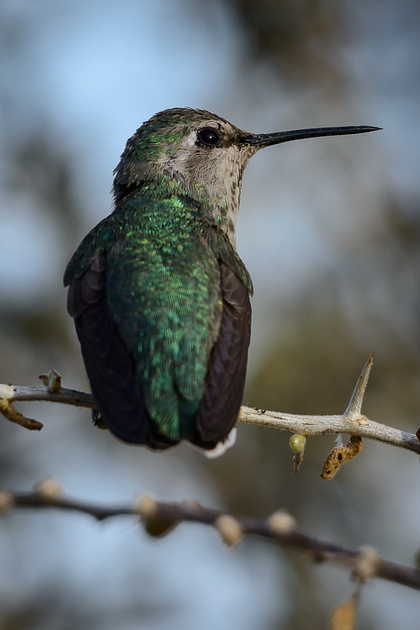 Well, that was my week in birds.  I birded one full day, and about two hours for three days.  In the end, I was able to get 19-20 life birds.   My advise if you were to go to the Phoenix area to bird...well, any area really...is to study the area, set a life bird goal of 3-5 specific birds, and If the temperatures start heading above 90 degrees, to just go out in the mornings and evenings.. the rest of the time, just find a cool spot and take a siesta...it gets hot out there :-D.

Solo Deo Gloria!
To God Alone Be The Glory!

Jeannie Williams(non-registered)
Loved your bird-a-log!! My sons live there so I was able to relate and experience it with you!! You made such good use of your time in getting terrific lifers!!! Congrats. Hope you were able to see the Pharaloxia and Roadrunner!! Beep, beep!!! Keep writing!!!
Connie Morris(non-registered)
Wow, what a week! Nice group of lifers for sure. Really enjoyed seeing through your lens :)
Craig Moore(non-registered)
Greats shots Steve, Congratulations.
Jack(non-registered)
Nice Steve! As usual excellent photos. It looks like you made the best out of the time you had. Congrats on your lifers!
No comments posted.
Loading...